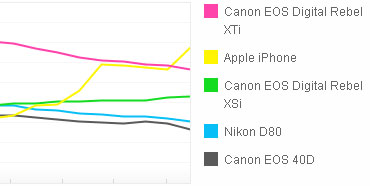 Get this! The iPhone is the most popular camera on Flickr! And it isn’t even a camera! LOL! According to Flickr’s camera finder the iPhone beat out the Canon Rebel XTi and other big players in the DSLR game.

The The LA Times notes that this isn’t a “shift” in consumer choice but a change in the way folks use phones. After all, people who use iPhones take lots of pictures and can send them to Flickr pretty easily? I’d wager that more people have iPhones, for example, than have Rebel XTis. And they definitely have more iPhones than 40Ds or Nikon D80s.

Sadly there’s no information regarding the use of disc film.