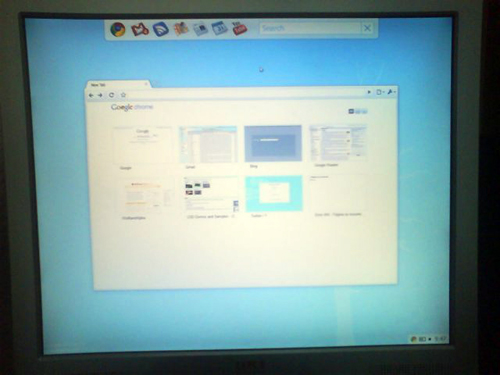 A blurry snapshot of ChromeOS has surfaced showing a new, Mac-like dock and some battery and wireless notifiers in the bottom corner. This OS looks so stripped down compared to other OSes we’ve used that we’re loathe to call it anything more than a shell. However, we all love us some Google so let’s just stare at it for a while while we eat our Subway sub.

Interestingly, what we’re seeing her is a severe version of a Kiosk Linux implementation. Everything extraneous has been taken out – you don’t even see a desktop there, just a dock – and the major players are web apps. I wouldn’t be surprised if local storage was connected to the cloud and didn’t actually allow for formal browsing. However, do you think it will have a command line?