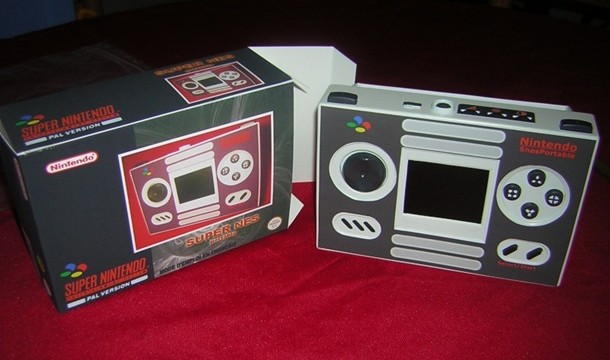 Who knows when you might get the urge to play a few levels of Yoshi’s Island, or try to set a new lap record in Mario Kart? The need might strike while you’re riding the Subway, or while you’re eating a nice meal, or while getting a drink with a pretty girl. Well, now you can indulge yourself in a round of Killer Instinct in any of those situations — though I don’t recommend it in the last one. Or the other two, really.

It looks to be about the size of a large hardback book (still smaller than a Game Gear), but the screen is distressingly small. No doubt it’d be fun to truck around your cartridges everywhere you go, but I don’t think you’re really getting the full SNES experience here. No two-player, for instance, which means real games of Super Mario Kart and Contra 3 are out of the question.

Personally, I’ve gotten more than used to playing all my old games on an emulator on my laptop (I’m working on Crystalis and Mega Man 3). Nice big screen, save states if I need them, and once you get used to using a keyboard, it’s not that bad. Plus, it’s just as portable.