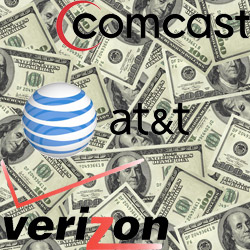 There’s two ways to look at the story that many of the country’s biggest ISPs have refused government stimulus money for broadband infrastructure investment. One, the ISPs patently don’t need the money, and are more than capable of delivering broadband to as many Americans as possible with their own capital. Two, the ISPs could use the money, but they’d prefer not to accept it lest they be beholden to all sorts of government-imposed restrictions, one of which relates to net neutrality.

Let’s take the first one, that the ISPs, including Comcast, AT&T, and Verizon, have a sufficient amount of capital to invest and build the country’s broadband infrastructure. (I write this using Cablevision’s Optimum Online Ultra, which is pretty much unnecessarily fast.) Since they have the capital, they don’t need to accept any government stimulus money, unlike, say, GM, which was about two minutes away from bursting into flames had it not received sweet, sweet government loans. That really is a Perfect World, Kumbaya scenario, I think. If the ISPs are so flush with cash, how come people complain on a daily basis about how rubbish Comcast is; how come they have to impose bandwidth restrictions on connections? If their networks are so robust—made robust, mind you, with all that money they supposedly have lying around—then they shouldn’t have to worry about Timmy High School Student streaming tons of video all day long.

Hence, the second way to look at this, that the ISPs damn well could use the money to invest in this country’s broadband infrastructure. No one expects rural Georgia to be zipping along the Internet at South Korean or Swedish-esque speeds, but surely the days of dealing with “slow Internet” should be behind us. This has to do with net neutrality. In taking the broadband stimulus money, the ISPs would have to agree not to “favor any lawful Internet applications and content over others.” So if AT&T, for example, strikes a deal with Video Site A instead of Video Site B, AT&T can’t turn around and give Video Site A preferred access to its network. That’s the crux of net neutrality, ISPs want to cut deals with their preferred partners at the expense of everyone else. It hampers innovation—Develop a cool Web site? Better cough up the bucks, otherwise people accessing it will be bitching about the slow speeds that’s entirely not your fault!—and rewards the smoke-filled-room shenanigans that have been a detriment to consumers for years.

Of course, no ISP will admit, on the record, to refusing stimulus money because they’re afraid of all the restrictions and unwanted attention.

Not that I’d worry about it: as we all know, the Market solves every single problem!