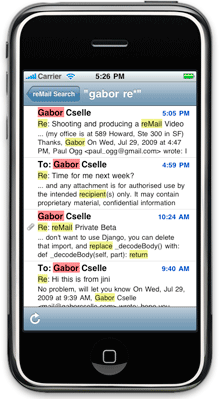 Last May I wrote about reMail, a new iPhone application that brought full-text search to the iPhone. It was quite impressive (especially given that the iPhone lacked any search functionaly at all at that point), but the application had a few problems that kept it from really catching on, including a subscription fee and some possible privacy issues (it required users to hand over their Email login credentials). Today, that changes: reMail is launching an entirely new application on the App Store that should allay any privacy concerns and features a one-time price of $4.99 instead of a subscription. You can download it here.

The last version of reMail relied on the company’s optimized servers, which were much more efficient at running search queries than most Email providers. However, that technique came with one caveat: it required users to hand over their login credentials. I pointed this out last time I wrote about the company, figuring that most people probably wouldn’t mind too much, but CEO Gabor Cselle says that it was a surprisingly common complaint — people are just unwilling to hand over that login data (which is probably a good thing). Fortunately, reMail 2.0 does away with this problem.

The new version of reMail downloads the entire contents of your Mailbox — every single message — onto your iPhone, which it then stores locally. That may sound undesirable for those of us with large Email boxes that are many gigabytes large, but the reMail team has done an excellent job at compressing data for its search index: Cselle says that they’ve managed to squeeze 100,000 Emails into 500 megabytes (most Email accounts are only a fraction of that size).

To get started, you’ll have to download your entire mailbox to your phone which will take some time (Cselle recommends setting the phone to Wi-Fi and leaving it over night), but the service will pick up where it left off if you have to have to cut it off mid-way through the download process. Searching itself works exactly as you’d hope, showing results only a second or two after you’ve typed a query, with matching words highlighted.

Of course, the iPhone 3.0 software update finally introduced Email search to the iPhone, which may lead some people to wonder why reMail is even necessary. Cselle points out a few major benefits: for one, reMail’s search is around five times faster than the iPhone’s, and it searches full-text (the iPhone only searches headers). And reMail retains its full functionally offline, while the iPhone’s search often requires a data connection to search older messages.

As I’ve written before CEO Gabor Cselle is a guy who really knows Email. Here’s a brief bio of Cselle from our last post:

He wrote his Master’s thesis on Organizing Email, worked on the Gmail team, and was also VP of Engineering at Xobni, which he left last year to pursue his own company. The company’s backers include Paul Buchheit and Sanjeev Singh, who built a little application called Gmail (they also co-founded FriendFeed). These guys know what they’re doing.