Anyone who has ever used Google’s automated translation service knows that it’s not exactly perfect — generally you’ll wind up with words that are close approximations of what you started with, but Google inevitably decides to change the meaning of at least a few sentences, just for kicks. Today, there’s a new site that taps into Google Translate’s under-appreciated creativity and magnifies it to the point of greatness : Translation Party!.

The site is incredibly simple: you enter any English phrase you can think of, and it uses Google’s automated translator to convert it into Japanese. And then it translates it back into English. And back into Japanese. At each step along the way, the words you began with gradually take shape to form something entirely different and (hopefully) awesome. The retranslations continue until you reach what the site calls ‘equilibrium’, when the English and Japanese words translate back and forth into exactly the same thing. Fortunately, it usually takes at least a few steps for your words to reach equilibrium, and the resulting sentences are often hilarious.

There really isn’t much else to do on the site, but it’s definitely a great way to kill some time. Movie quotes and song lyrics seems to work best. You can also check out a list of some of the results other people are generating by clicking the “crash other parties” at the bottom of the page.

Enjoy it. And October 5 power, to please. 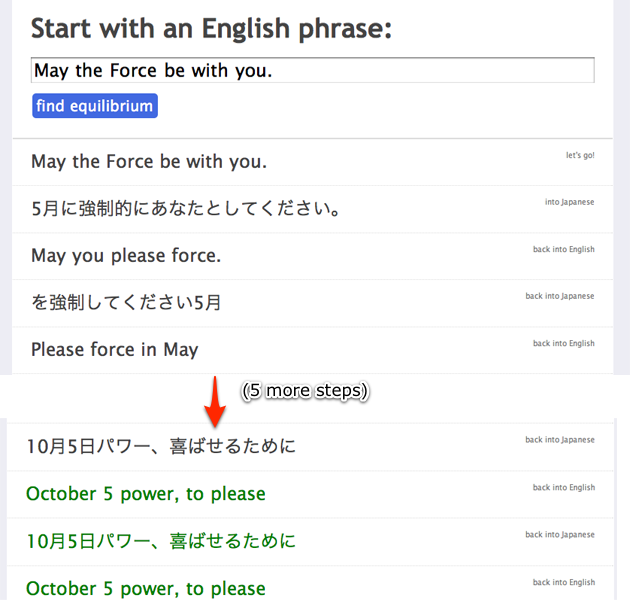