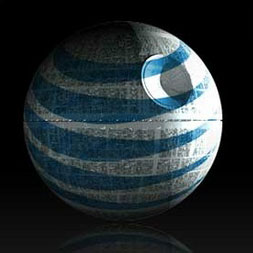 AT&T has made even more people than usual angry when it started blocking/filtering parts of 4chan late last night. The popular message board, famous for being able to brew online (and offline) shitstorms like no other web property could, saw portions of its publication – including /r9k/ and the infamous /b/ – blocked for AT&T customers across the United States. Quickly enough, there was a lot of rallying going on, with 4chan members and fans virtually gathering to plot digital riots and all-round mayhem.

An update on the situation as of 8 AM Eastern Time: access to 4chan has apparently been restored, with AT&T reportedly confirming the hours-long block of portions of the site, “following the practices of their policy department.” (see updates below)

AT&T went on to say that they contacted (or at least attempted to contact) the owners of 4chan, which Moot denies. AT&T told CentralGadget that they have specific reasons why they blocked these parts of the site, but they would not disclose them, further stating that they have requested specific things and changes from 4chan’s owners to which they have failed to comply.

Meanwhile, 4chan is apparently under DDoS attack, supposedly because of the attention the site has been getting for the past 12 hours. The site is sometimes down, sometimes up but very slow, according to various reports. Note that this is not AT&T’s responsibility and quite possibly even the reason for the company to have made the dangerous decision of restricting access to the message board in the first place.

Updates coming, including some of the actions taken by 4chan members and friends to retaliate.

Update 1: this thread on Digg (760 votes and counting) pointed to a now-removed fake article at CNN’s iReport about the death of AT&T CEO Randall Stephenson.

Update 2: there’s pledge up at ThePoint to boycott AT&T and cancel the Internet service with them.

Update 4: an announcement on the Project AT&T forum reads: “All rioting/’war’/protests have been suspended for the time being.”

Update 5: AT&T got back to us with a statement

Beginning Friday, an AT&T customer was impacted by a denial-of-service attack stemming from IP addresses connected to img.4chan.org. To prevent this attack from disrupting service for the impacted AT&T customer, and to prevent the attack from spreading to impact our other customers, AT&T temporarily blocked access to the IP addresses in question for our customers. This action was in no way related to the content at img.4chan.org; our focus was on protecting our customers from malicious traffic.

Overnight Sunday, after we determined the denial-of-service threat no longer existed, AT&T removed the block on the IP addresses in question. We will continue to monitor for denial-of-service activity and any malicious traffic to protect our customers.

Update 6: 4chan owner Moot has updated the status blog with a bit of an explanation:

For the past three weeks, 4chan has been under a constant DDoS attack. We were able to filter this specific type of attack in a fashion that was more or less transparent to the end user.

Unfortunately, as an unintended consequence of the method used, some Internet users received errant traffic from one of our network switches. A handful happened to be AT&T customers.

In response, AT&T filtered all traffic to and from our img.4chan.org IPs (which serve /b/ & /r9k/) for their entire network, instead of only the affected customers. AT&T did not contact us prior to implementing the block. Here is their statement regarding the matter.

In the end, this wasn’t a sinister act of censorship, but rather a bit of a mistake and a poorly executed, disproportionate response on AT&T’s part. Whoever pulled the trigger on blackholing the site probably didn’t anticipate [nor intend] the consequences of doing so.

We’re glad to see this short-lived debacle has prompted renewed interest and debate over net neutrality and internet censorship—two very important issues that don’t get nearly enough attention—so perhaps this was all just a blessing in disguise.

Aside from that, I’ll also add that there is some big news due later this week. Keep an eye on the News page, Twitter, and global message for updates.

As always, I can be reached at moot@4chan.org.

PS: If any companies would like to hook us up with some better hardware, feel free! The architecture we’ve got powering this large and influential beast is really quite embarrassing. ( ._.)