Scout Labs, a SaaS dashboard that makes it easy to keep track of what people across the internet are saying about particular topics or brands, has added a new focus group-like feature that is worth a look.

The product, which we first reviewed in December 2007 while still in private beta, now includes a “Quotes” section which pulls in real-time quotes from people who are chattering or Tweeting about a brand or topic on the web. The feature scans the quote for sentiment, and breaks quotes down by positive, negative or neutral undertones. The algorithm that deciphers the quotes also categorizes them as “wishes,” “recommend,” “issues,” or “caveats.” Caveats indicates comments that include the word “but.” For example, a caveat quote would be “I like Netflix but…” And you can filter quotes from Twitter exclusively.

There are six main sections to the Scout Labs dashboard: Blogs, Sentiment, Graphs, Photos, Videos, and Twitter. Blogs displays all of the blog posts that have been indexed by Scout Labs related to a particular keyword or phrase. The Sentiment section breaks these blog posts down into positive, neutral and negative categories. Graphs provides visual analytics of the sentiment around a brand on the web. And photos, videos and tweets related to your brand are collected for display as well.

There’s no doubt that there is a need for companies to accurately and measure the real-time buzz around their brands on the web. Scout Labs seems to be a innovative tool to do this, and is reasonably priced. The dashboard costs $99 per month for tracking up to five brands. In its short lifespan, Scout Labs has been able to serve many big-name companies, including Coca-Cola, JetBlue, Netflix, McDonalds and Disney. Competitors in the space include ViralHeat and Radian6. 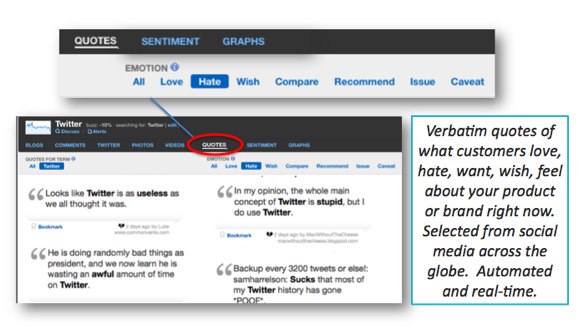