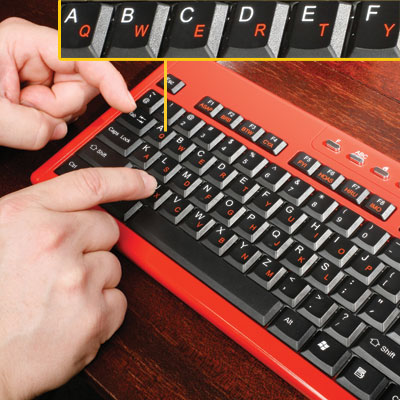 I just returned from helping my Grandma set up a computer for typing out stuff, and incredibly, see this “hunt and peck” keyboard being offered on the ol’ internets. “Why, that would be perfect for Grandma,” I think, since she isn’t a very good touch typist. But upon closer inspection, this keyboard is bafflingly user-unfriendly. Look at a key on your keyboard. How many letters are on it? One or two? One, right. Yeah, uh… this one has two.

Incredibly, in the name of making hunt-and-peck easier on people, they’ve put the letters of the keyboard in both QWERTY and ABC layout, differentiated only by color. Maybe if they’d done something with lighting, or had a big switch that shifted it so only one letter was visible on each key… but two letters on each key?! It’ll drive a body insane!

It’s freaking me out just looking at it. Don’t buy this under any circumstances, unless it’s for a bug or something that sees keyboards like this anyway.