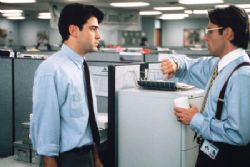 There’s no denying it any longer: research has finally proven that new technologies like laptop computers and mobile phones have increased our productivity significantly.

Furthermore, mobile communications have resulted in us working longer hours, too. That means modern technology is likely to be thanked for the wonderful state of the global eco … never mind.

Anyway, the shocking findings come from staffing firm Kelly Services’ “Global Workforce Index” (via eMarketer), which shows that no less than 78% of workers in the US and Canada – across all generations – believed that gadgets such as laptop computers and mobile phones have effectively increased their productivity. Over half of the respondents even said they felt ‘much more’ productive, and only 2% said it made them worse workers (I’d love to meet them someday).

Other key findings: more than seven in 10 workers from all countries considered the ability to work outside of the office a ‘positive’ development, and 87% felt an office telecommuting policy would be attractive to them as employees.

In addition, 30% in North America, 33% in Europe and 41% in the Asia-Pacific region agreed that they were working longer hours because of mobile communications.

Never one to accept study findings without checking and then double-checking the facts, we’ll conduct a little research of our own:

Which effect did the uptake of modern technology (laptops, mobile phones etc.) have on your productivity?(surveys)