I was not aware that the live event marketplace was so crowded. Apparently there are hundreds of ticket websites out there including StubHub and TicketMaster. Luckily, TicketFlow is there to make sense of it for you.

TicketFlow is the self-described Kayak of ticket sites. You type in an artist, team, play, or musical and it digs through the various websites to find tickets that match your requirements. Want to see a cheap Bob Dylan concert? Head down to Virginia. Want to watch Toxic Avenger: The Musical? Why? 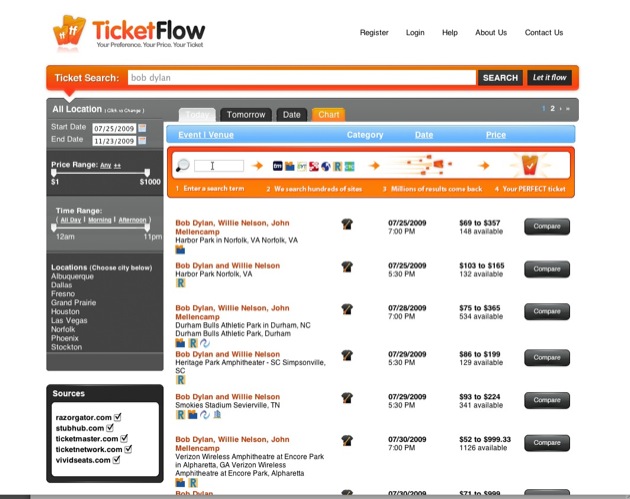 The found, Justin Hartzman, worked with a buddy to aggregate all of the ticket sites into one simple-to-use interface. One other site, FanSnap, performs a similar function and also allows you to chose your seats at the venue.

The system also includes a suggestion engine. You tell it what you want to do and in what city – concert, play, sporting event – and it will find events in your time frame and budget. It seemed to work fairly well in New York except for an unfortunate typo in the application dialog but, as we all know, nobody is perfick. See if you can spot it… 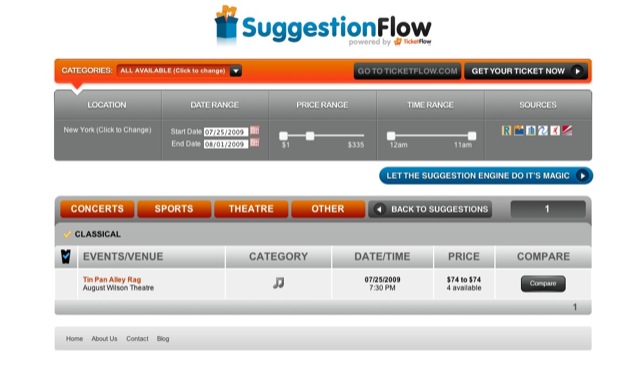 Generally this is an interesting and untapped market. The live music and event discovery world is still in its infancy and aside from the obvious sources – mostly weekly papers and some fan sites – you’re not going to hear that Willie and Bobby will be playing in your neck of the woods until it’s too late. The most important aspect here is obviously price comparisons, something that was once time-consuming.

Sadly, this does not do a search into the infinite future, ensuring that my life will be forever free of the pan flute for months – if not years – to come. 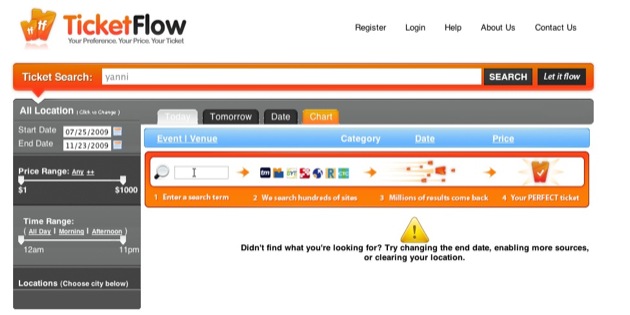