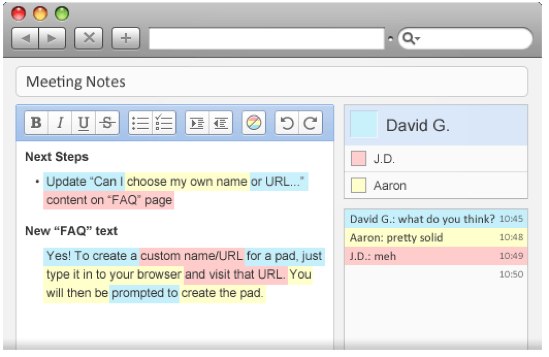 AppJet’s EtherPad, the real-time Google Docs-like wiki tool we wrote about last fall, has been upgraded to be prettier, more user-friendly and far more collaborative than before. EtherPad was the brainchild of former Googlers (who founded online programming tool and Y Combinator funded AppJet) who wanted a real-time, yet group oriented way to collaborate on notes and documents. Thus, EtherPad was born. We have 100 free beta invites to the premium version of EtherPad here.

When we first reviewed EtherPad, we found the web-based rival to Google Docs to be sore on the eyes but incredibly useful. What made EtherPad unique from the start was the ability to have multiple people making edits and writing in a document in real-time. You simply create a document, send the link around, and anyone can join. Each user’s edits are highlighted in a different color (with a key featured on the side with which color belongs to each user). Changes are made in absolute real time, something even Google hasn’t been able to do (Google docs update every fifteen seconds). Users can also chat in the sidebar and save versions of documents forever.

Now, EtherPad has launched a new, redesigned version with more tools and functionality that may just give Google Docs a run for its money. First, EtherPad completely redesigned the entire UI to look softer and simpler. The interface is much less stark and easier on the eyes. EtherPad also lets you import and export Word, PDF, Plain Text and HTML documents. Appjet made writing a document in EtherPad more like writing out notes in Word or Google Docs, adding rich text formatting, including bold, underline, italics and strikethrough commands to the wiki. And organization of notes within a document became a little better with the ability to add bullet points.

Additionally, EtherPad now has a monetization strategy. You can use the service for free, but you cannot make your documents secure via a password. The EtherPad Professional Edition is securely hosted in the cloud, free for up to 3 users; $8 per user per month above 3 users. The Private Network Edition for Enterprises is $99 per seat as a one-time fee for life, but your documents will be kept behind a firewall.

AppJet’s co-founder Aaron Iba says that 300,000 synchronous pads have been created on EtherPad and it is being used by a vast variety of companies and organizations. For example, students at Stanford Law School use EtherPad to collaborate on note-taking during class. And tech companies are using the product to interview engineers remotely while still being able to test the ability to write code for an application at the same time.

AppJet recently closed an angel round of funding of about $250,000 led by Mitch Kapor, who was joined by Chris Yeh, and others. The startup has also received seed funding from Y Combinator and the FriendFeed founders.

After seeing a demo of the new and improved EtherPad, it seems clear that the fledgling product has the potential to rival Google Docs and other popular collaborative wikis on a pure feature basis. EtherPad is planning to add several more features to the mix in the near future including spell check, the ability to import images and video conferencing.