As we expected, the new “like” functionality in Google Reader seems like it’s seeing some good usage. Certainly, given that “likes” are fully public, we’re seeing much more social activity on feed items than previously with Google Reader’s “share” or “share with note” functionality. And that’s good. In a world of Twitter, FriendFeed and Facebook, where social sharing is very easy, Google Reader needs to become more social, more alive, if it’s to continue growing.

But quite a few people don’t like the functionality — at all. A search of “Google Reader Likes” on Twitter returns results that are nearly evenly mixed between people curious about the feature, and those that wish it would go away. Says one user on Twitter, “Hating the new “like” feature in Google Reader. I don’t want to see Likes from the Unwashed Masses. Anyone know if I can disable or filter?” That seems inline with what many are saying. They don’t care who liked a story, and want a way to turn the feature off. And one user has already created a script to do so.

Personally, what I think what the feature needs is more options. There definitely should be one to turn it off, but there should also be something that lets you sort items in any feed by the number of likes it has. While some people hate the idea of only reading what someone else likes, for popular feeds, it’s actually a somewhat useful filter in determining the most interesting articles. (But again, only in feeds that are popular enough to have many likes to begin with.)

The ease of “liking” an item is good. And I like that it’s not right next to the “star” at the top of an item so users have to at least pretend they looked at an article to “like” it. From what I’m seeing, since Google Reader implemented this feature and the search for users functionality, the number of requests for people to follow my public Google Reader shared items feed has gone through the roof. Again, that’s a good thing to keep the service moving in the direction of social.

But there is one very key flaw to the idea of Google Reader “likes” — if you read news as it comes in, you’re likely to read it before anyone is even able to “like” it. To take that idea further, the longer you wait to read your feeds, the more useful the “likes” are as a social feature. That rewards reading stories late, which is pretty much the opposite of the real-time sharing that Twitter and the like offer.

And unlike FriendFeed, where someone “liking” an item often brings it to the top of the stream, once you read an item in Google Reader, the likelihood that you’re ever going to read that item again is small. The whole concept seems to work against itself, presently. Now, this could change when Google Reader “likes” have their own API, and third-parties can do interesting things with them. But for now it seems to be encouraging RSS reading — already a slow medium through feed readers — to be done even slower.

Hopefully, Google’s ultimate goal here is to create some sort of “Best of” feeds area which you can visit at any time and see what hot items are across Google Reader. It really should have been doing this from the beginning with the “shared” functionality, but it never implemented it. Instead, Digg has owned this area, and now others like Bit.ly are about to enter that game in a big way.

And so Google’s social strategy remains flawed. There are an increasing number of pieces there, but no one can yet put them in place. 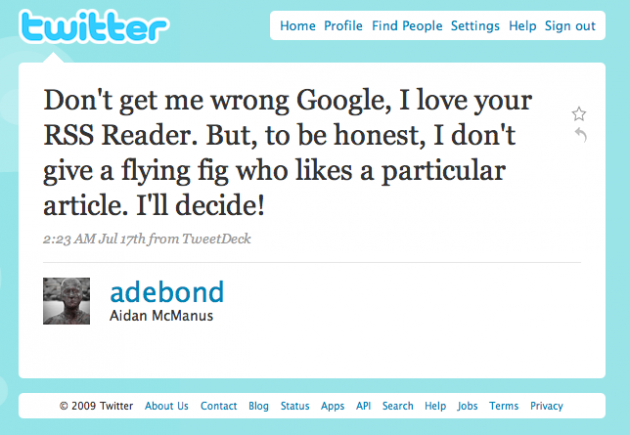 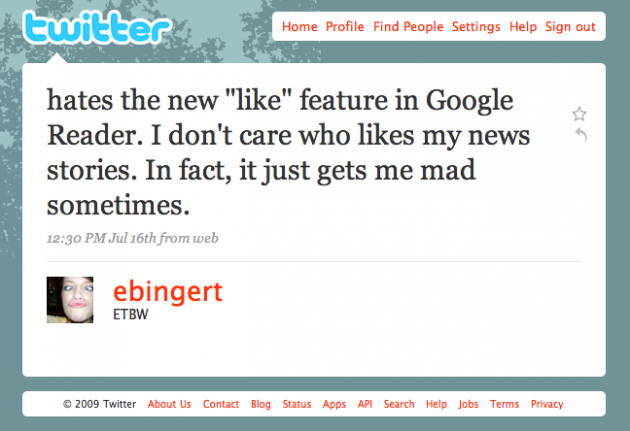