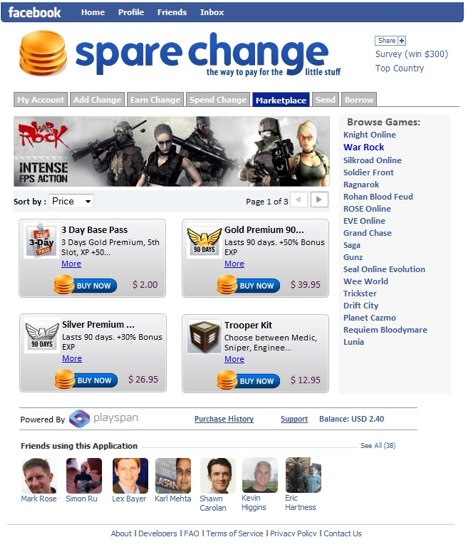 Micro-payments across the gaming world is gaining serious traction, especially on social networks. PlaySpan, which powers micro-payments across over 1,000 video games and virtual worlds, is launching marketplace storefronts for Facebook and MySpace (which will be rolled out soon). The marketplace will which let users purchase online game items, virtual goods, and game currencies for online games and applications directly from their social networks.

What makes the marketplace interesting is that you can buy, trade, and sell goods within the marketplaces on Facebook and MySpace and then use the items in online game environments. And making a transaction on the marketplace becomes a whole lot more social, as your friends may be able to see it on your NewsFeed. PlaySpan, which recently acquired micro-transaction app developer Spare Change, has processed more than $50 million worth of micro-transactions through its PayByCash and Ultimate Game Card products. PlaySpan also raised $16.8 million in a series B funding last Fall from Easton Capital Group, Menlo Ventures, Novel TMT Ventures, and STIC. The startup was founded by a 12-year-old, Arjun Mehta, but it is actually run by his father, CEO and co-founder Karl Mehta.

The recent acquisition of Spare Change now makes sense. While PlaySpan’s focus so far has been within games and virtual worlds, it made a recent deal to power micropayments on hi5. Spare Change, on the other hand, powered micropayments across 700 social networking apps on Facebook, MySpace, and Bebo, and at the time of its acquisition was on its way to processing $30 million worth of transactions this year.

It seems like these days everyone is getting into micropayments, and the number of players are scaling quickly. With continued expansion on social networks, startup PlaySpan can become a serious player in a space where bigger players like PayPal, Facebook and MySpace are all considering making a move. The competition may be stiff but as micropayments start to integrate with consumers’ social graphs, but there seems to be the potential for more than enough opportunity for both startups like PlaySpan and Zuora, and the more established players.