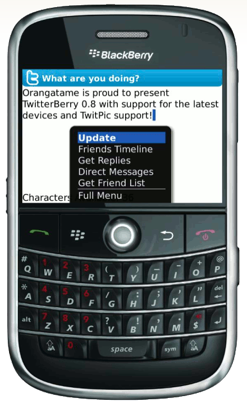 As Twitter continues to see skyrocketing growth, desktop and mobile phone clients are becoming a big business. Last month we broke the news that TweetDeck was asking some services for around $50,000 to appear in the client. Now we’ve gotten word that TwitterBerry, one of the most popular Twitter clients for BlackBerry phones, is running an auction for the coveted spot of “default media provider” for the app.

Orangatame (the company that makes TwitterBerry) is inviting select services to submit bids next week, at which point participants will be told the highest bid and will then be given a chance to submit one followup bid. Apparently Orangatame is looking to keep its options open in the future, as this bidding only grants the winner the default spot for three months.

Getting default position in a popular Twitter app can be enough to raise it from obscurity to popularity in a matter of months — one need only look at ImageShack-owned yFrog for proof, which leaped to popularity not long after becoming the default service for Tweetie, Twitterific, and a number of other apps (see graph below).

As I’ve written before, I don’t think there’s anything inherently wrong with applications requiring payment for a service to get integrated, or to become the default. Given how many services that are out there that do exactly the same thing, developers need some way to choose, and it’s easy to see why they’d want to make some money in the process. However, it also opens the door to having an app littered by potentially inferior services with deep pockets. Developers will always claim to strive only to accept ‘cream of the crop’ services that are also willing to pay, but it might be hard to pass up a not-so-great service that’s willing to pay a significant premium.