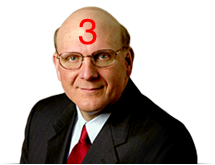 We poked some fun at Microsoft CEO Steve Ballmer earlier today for his poor track record with regards to predictions for competitors. But really, Ballmer is just as good as any big company CEO at getting his troops and audiences fired up about something. I’ve spoken with a few employees who’ve described his rabble-rousing as nothing short of mesmerizing. And he was apparently in top form again today at the Microsoft conference currently happening in New Orleans.

But there may be a method to the madness. We’ve all seen “Developers, developers, developers” by now. That was Ballmer at his finest, repeating a single word 14 times in a row before he ran out of breath. Yes, 14 times. But this new Ballmer in the post-Gates era of Microsoft has scaled back a bit. Now he seems to only emphasize things in sets of threes. Ashlee Vance cracked the new code in an aside in his Bits Blog post today.

Just read some of the key blurbs from his speech today:

Ballmer’s “Rule of Three” is the new Steve Jobs “Boom!”