Scribd, the popular document sharing service that’s recently made moves into the Ebook market, has just launched the latest version of iPaper, the site’s online document viewer. Scribd originally debuted iPaper in February 2008, after deciding that the existing Flash Paper viewer developed by Adobe didn’t perform well enough or offer enough features to keep up with the quickly growing service.

The old version was an improvement on Flash Paper, with a much smaller footprint and speedier browsing, but it still left quite a bit to be desired. For one, it was still clearly very Flash and not a native browser element. And the navigation bar at the top of the viewer was unnecessarily cluttered, making the widget seem bulky. Contrast that with Google’s document reader, which uses HTML and image files, and it just didn’t feel like a natural extension of the browser.

The new viewer (screenshot below) is a big improvement. It’s still in Flash, which may be enough to turn some people off, but it manages to look like it’s native. Scribd says that iPaper 2 does this by hooking into the browser’s native widgets (the company believes it’s among the first Flash apps to do so). It may sound like a small addition, but it definitely makes a difference. The new viewer also has improved searching functionality, adding the ability to see where a search result lies in context with the text around it.

Most of the other additions are more minor: the viewer simplifies the process to share a doc through Twitter or Facebook, and the view modes are a bit easier to use. But really, the big difference here is aesthetic, and it’s safe to say the streamlined design is a big improvement. iPaper 2 is currently live on Scribd’s main site, with plans to roll out support to embedded documents in about a month.

While Scribd is the leader in this space, it has plenty of competitors that offer their own document viewers, which include DocStoc, Issuu, and Edocr, not to mention Google’s own embeddable doc viewers. 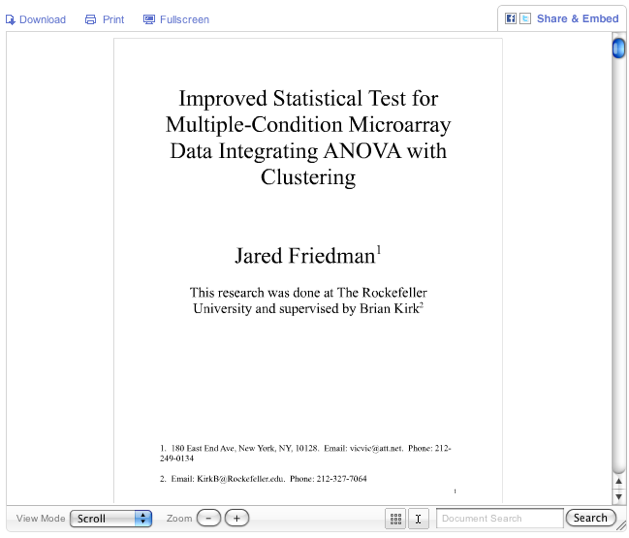