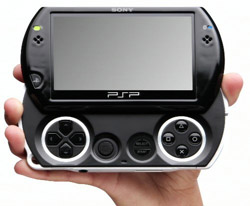 While we’re all thrilled to see Google throw a new coat of paint onto the Linux kernel, there are, in fact, other things going on Out There, like, say, the quickly evolving PSP. Yesterday’s exotic rumor suggested that Sony is working on a full-fledged PSP2, a system with Xbox1-level graphics. Today I spy an interview with a Sony so-and-so that attempts to explain the company’s rationale for the PSP Go, how PSN compares to XBL these days, and so forth.

The highlights (kids today only have attention spans for highlights):

• Again, the PSP Go isn’t meant to replace the PSP-3000; not everyone in the world has access to broadband, and some people just like having physical media.

• The plan is to have every game from here on out available digitally (via the PSN or store-bought download cards… not every 16-year-old can use his father’s credit card to buy stuff online).

• Yes, Sony wants to bring as many PSOne games to the PSN as it can.

• Sony thinks PSN isn’t as “behind” XBL as it was, say, two years ago.