AOL took another step towards fully embracing the lifestream today with the release of a slew of new AIM clients in beta and a new AIM Lifestream site, which brings together status updates from your AIM buddies with your activity streams from Facebook and Twitter. Earlier today, AOL quietly launched beta versions of AIM 7 for Windows, AIM for Mac 2.0, and a new AIM Windows Mobile client. (An upgrade to its iPhone app cannot be far behind).

All three of the AIM betas include a new “Lifestream” tab, which allows you to read all of the updates from your friends on Facebook and Twitter, along with public status updates from your AIM buddies. You can also share videos and links via your YouTube and Delicious accounts. Expect more services to be added. The AIM clients also include the familiar “Buddies” tab, which lets you launch private IM conversations with your AIM buddies, and a “Me” tab shows your profile stats, updates, and notifications.

What AOL is doing here is combining a FriendFeed-style approach of bringing together social updates from different services across the web with more private IM conversations. AIM status messages function as public utterances, and already on the AIM Lifestream site you can upload photos and comment on or indicate that you “like” a particular message from a buddy (expect these features to make its way into the clients soon as well). AOL is not so much trying to copy Twitter or FriendFeed as it is trying to bridge the private one-on-one message stream of AIM with the more public social conversation streams across the Web.

Inserting the lifestream into AIM is part of a much larger strategy, which began with its acquisition of Socialthing nearly a year ago. Last February, it brought Socialthing-powered lifestreams into Bebo, and last April it began experimenting with bringing lifestreaming and chat to Websites via a chat toolbar. That effort soon spread to other AOL sites and recently was renamed AIM Connect. (Guess who it is trying to compete against with that product).

The AIM beta clients provide further clues about where AOL is going, but are not yet fully-baked products. The Twitter and Facebook streams are only one-way, for instance. AIM can obviously support two-way communications (one of the big selling points of Socialthing), but AOL probably needs to negotiate that with Twitter and Facebook first. It could also use a URL shortener to make it easier to pass links. But AIM is huge, with around 50 million active users. I wonder how fast it would take for AIM to become one of the top Twitter clients. 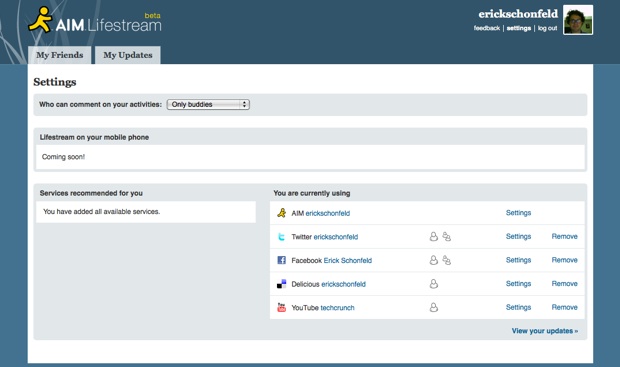