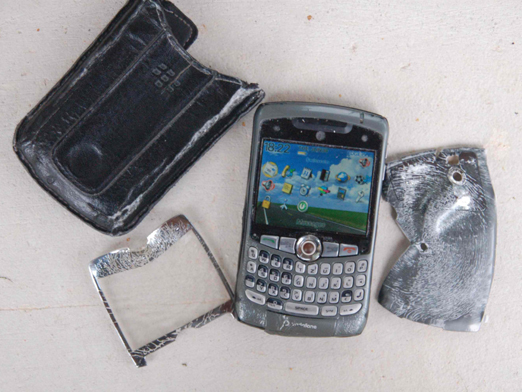 BlackBerrys are generally durable devices. I had a BlackBerry 7130e for almost three years until my son gave it a bath in a cup of ginger ale. This dad’s BlackBerry somehow survived a trip into a hot oven. It needed a new case afterwards, but it still works alright.

Couple of weeks ago, like a good dad, I was baking with my 10 year old daughter. I couldn’t find my Blackberry afterwards and was looking everywhere. Tried calling my number etc. When the cookies were done, I opened the oven and found my BlackBerry on the cookie tray: well cooked!!!

The plastic casing was warped, very soft and burning hot. After a cool down, to my immense surprise, when I switched it on, it worked…!

The keys were sticking a bit and the camera has lost some of its sharpness but otherwise, all is well. I have now picked up a new casing and it looks quite new again. They keys are OK again.

I quite liked the grunchy look but have to admit that it is easier to use in its original version.

Anyone have else have tales of incredibly tough cell phones?