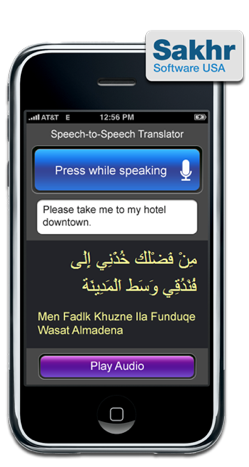 Bet you didn’t see this one coming. Back in 2007 we wrote about a service called Dial Directions which lets you call a special phone number and verbally ask for directions, which are immediately sent to you via SMS. Today comes news that the company has been acquired by Sakhr Software, a development house specializing in Arabic natural language processing (NLP). And with their powers combined, they’re building a real-time voice translation service that will allow users to translate phrases from their mobile phones on the fly.

It’s a better fit than it sounds. Dial Directions has spent the last few years building mobile applications (it has an app for the iPhone on the App Store), and has also built out the technology required to efficently transfer voice input to servers, where it can then be processed (this server-side processing is also used by Google Voice Search and a number of other apps). Once it makes it to the cloud, this speech will be routed through Sakhr’s software, which is capable of translating English to Arabic and vice-versa. Translated audio and text are then sent back to the mobile phone, all within a matter of seconds.

The companies have jointly produced a beta version of the application for the iPhone and BlackBerry, which you can see in the video below. The application is currently in testing with select enterprise customers, with plans to release a consumer version around the end of the summer.

Sakhr’s customers include the Department of Defense, Department of Homeland Security, and the Department of Justice, so it wouldn’t be surprising if the technology makes its way out to defense personnel. A Dial Directions spokesperson says that most translation devices in the field abroad rely on a set library of phrases, and says that the new Sakhr translation software should be more flexible. That said, it sounds like this will come with one significant drawback — if your phone can’t reach the network, the software won’t work.

Terms of the deal were not disclosed. Dial Directions intends to keep its service running for now, though it may not be indefinitely.