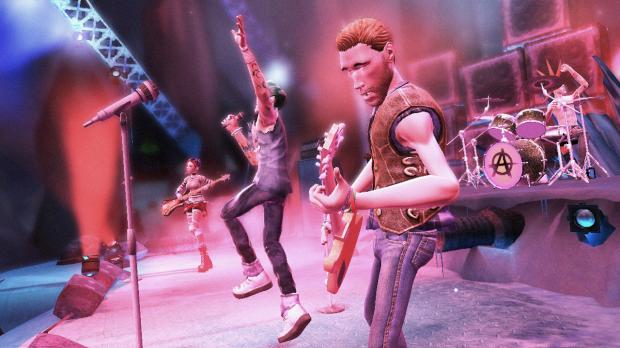 And Guitar Hero Smash Hits isn’t a bad game at all. It is what it is, though: a greatest hits game. If you’ve played all the Guitar Hero games before World Tour and you’re only interested in playing guitar, then you’ll find little of value here. But if you liked all of the early songs and have always wished you could play the drumming and singing parts, then Smash Hits is worth a closer look.

Smash Hits features 48 songs from five earlier Guitar Hero games: Guitar Hero, Guitar Hero II, Guitar Hero Encore: Rocks the 80s, Guitar Hero III: Legends of Rock and Guitar Hero: Aerosmith. All the songs found on Smash Hits are the master tracks from the original bands, whereas some of them were professional recordings from studio bands in the earlier games. There’s not a whole lot of difference other than that, though, except that you can now play the songs on the drums and you can sing using the microphone.

Everything else is your standard Guitar Hero game: Career Mode with a loose storyline, multiplayer, or quick play, plus you can take advantage of the built-in GHTunes track editor now if you want to take a stab at making your own song.

Could all the tracks in the game have been made available as downloadable content and played on Guitar Hero: World Tour instead of inside of full retail packaging? Yes, absolutely. But Activision made an entire game out of it and you end up saving some money in the long run since you get 48 tracks for $60 — that’s assuming you like all of the tracks, though.

This is a good game for people who loved the music from the first run of Guitar Hero games and want to be able to play the drum parts and/or sing the music parts.

It’s also a good game for someone looking to get into the whole Guitar Hero thing in the first place. I actually prefer the tracks in this game to the tracks in Guitar Hero World Tour. There’s not as much fluff here — all the bands and songs are easily recognizable and more rock-ish, whereas Guitar Hero: World Tour contained a bit broader set list as far as genres are concerned. This one’s got more pure rock and metal.

Anyone who just wants to play guitar and has already cruised through most or all of the Guitar Hero games before World Tour. You’d feel downright ripped off, as not a whole lot’s changed on the guitar and bass end of things.

However, you have access to all the songs without unlocking them first if you use the Quick Play mode and it’s easier to progress in Career Mode because you just need a certain number of stars for new venues to open up — those stars can be attained through a pretty big selection of initial songs, so play your favorites to move ahead quickly.

Finally, Guitar Hero Smash Hits doesn’t feature downloadable content aside from fan-made GHTunes tracks. So if you own GHWT and you’ve downloaded new songs, you won’t be able to play them in Smash Hits. That’s a big omission, in my opinion. Activision could have potentially enticed a fair amount of early fans to pick up Smash Hits even though they’ve already played all the songs before had they been able to download new songs to the game.

Guitar Hero Smash Hits is a standard Guitar Hero game through and through. There aren’t a whole lot of surprises here but if it ain’t broke, don’t fix it (as they say). It takes the early music of the series and leverages some of the gameplay features from Guitar Hero World Tour and Guitar Hero Metallica to make for a solid game with an above-average setlist.

If you like the series and you like the available songs, you won’t be disappointed. I think it could have been priced at $40 or made available as downloadable content but at $60, it’s still a good enough game to purchase if you’re new to the series and want to get set up with a good track list or if you’re a fan of the earlier games and want to play some of the earlier songs on drums or using the microphone.