A couple weeks ago, we wrote a post detailing why there needs to be some sort of iPhone app recommendation system. Just like iTunes has its “Genius” feature for music and movies, with over 50,000 apps now in the App Store, there needs to be a way to filter out what you don’t want and find what you do. If you have a lot of friends with iPhones or iPod touches, AppsFire may offer just that.

The service, launching in private beta today, allows you to share your favorite apps with anyone. Now, to be clear, I don’t mean actually share the apps themselves, but rather share the names of the ones you like and give others one-click access to download them also, from the App Store. So, say I have 100 apps on my machine, but I only really would recommend 15 or so, I would select those 15, and could send them out to friends on the various social networks.

AppsFire is actually an application that you install on you machine. Right now, it only works on Macs, but it’s coming for PCs soon. And there will event be an iPhone app, we’re told. Once the software is on your machine, it scans your iTunes folder to find your apps. It then opens a personal webpage on the AppsFire site and places the icons for your apps in front of you, asking you to choose your favorites. Once you do that, you can share them using the social networks, via email, in a widget, or simply get a link back to your AppsFire page. For example, here’s the link a co-founder of AppsFire, Ouriel Ohayon’s page.

It’s hardly a perfect system. First of all, the sharing mechanisms are a little clunky. And this isn’t a way to get personally tailored app recommendations based on what apps you already have an like. But it is a way to potentially find some new and interesting applications based on what people you know enjoy using.

The model for this is straight-forward: Affiliate links (through LinkShare and Tradedoubler), though Ohayon promises a “surprise” in that regard soon.

The limited private beta will be open to about 1,000 users at first, we’re told. You can sign up here. 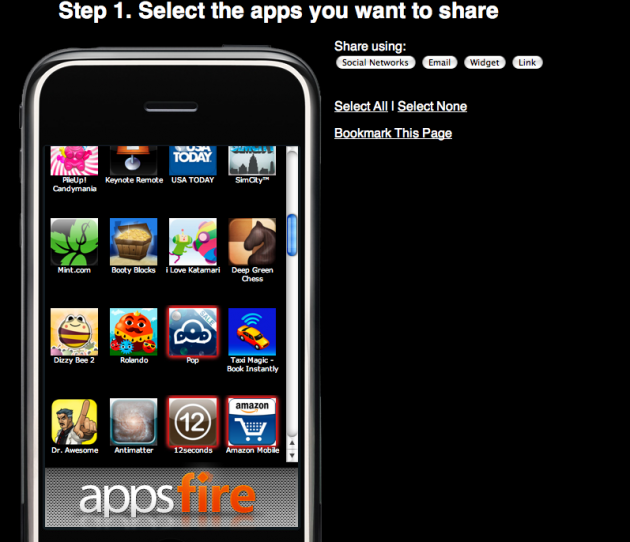 Disclosure: AppsFire co-founder Ouriel Ohayon is a former member of the TechCrunch family, and still contributes from time to time.