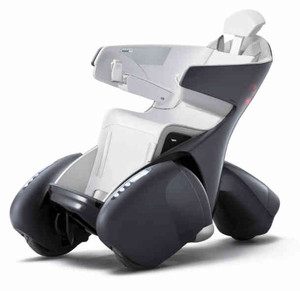 Formerly known as iSwing, Toyota‘s single-seat personal mobility cars gained worldwide attention back in 2005 when TIME magazine called it one of the ”coolest inventions” of that year. But now Toyota has decided to update the vehicle (by reworking the 4-wheel car into a 3-wheel “chair”), give it a new name (i-Real) and let the Central Japan International Airport near Nagoya test a total of four units on a daily basis.

This is the first test run for the vehicle in the real world. Once it’s charged, the i-Real is good to go for about 30km. Toyota says the top speed is 15km/h, but drivers usually don’t go over 6km/h.

Three of the i-Reals will be used for security patrols while one is to be used to assist airport visitors (that special vehicle is equipped with an information terminal, printed airport brochures and an external defibrillator).

Take a look at the i-Real in action in the short video below.