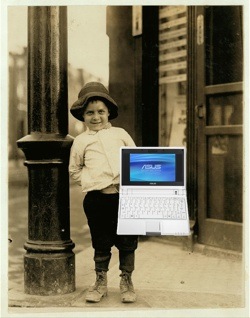 What Simon Dumenco lacks in tech savvy he makes up in relative prescience. There are a few issues media companies are dealing with now. There is a loss of ad revenue, competition from blogs, and, most importantly, falling circulation rates in communities that actually crave local news but don’t want to pay for it. There is a certain cohort of reader, however, that does not want to see the newspaper go away in its present form and there is a simple solution to their kvetching. Some folks expect the swift delivery of their news subscriptions in a format that is easily readable. While you could say “I thought that’s what the Internet is all about!” how are you going to convince a generation – folks in their thirties and beyond, for example – with the expectation that every morning a newspaper will be on the doorstep and a magazine will be in the mail to give that up and read their news on a screen?

By giving them a free e-reader.

In other words, hardware makers may have no choice but to turn their internet devices into multi-tier-subscription-based media machines, because there will never again be enough margin in the basic price of the hardware. And the more we get used to the idea of essentially subscribing to media as a way to pay for hardware … well, the more hope there is for media.

And this is abundantly true. If the NYT or Time Magazine or US Weekly creating something like the CrunchPad or the Kindle and gave it away to a certain percentage of subscribers, kind of like a cable box, with the understanding that they would need to subscribe to one or more magazines or newspapers on the web. The reader will be useless if you don’t subscribe to anything, obviously. You should also be able to recycle it easily it or send it back for a deposit refund. Think of it as the old timey beer growlers of media – you own it and it gets refilled down at the local content hole.

The current crop of netbooks won’t do the trick. I’m talking about a flat device with few buttons. It wakes up in the morning, charges via induction, and has great battery life. It needs to be color, sadly, for magazines like Vogue to jump on board and it would require a direct education for a mass of readers but it would be worth it. It would save paper, reduce the cost of distribution, and turn a mass of dead tree readers into screen readers.