Google has gathered tech press at the Clift hotel for a press event around Google Apps. At the ridiculous time of 9:30 in the morning. Meaning (1) I had to get up at 7 to get ready and battle traffic, and (2) I’m therefore not in a very good mood. Nothing like talking enterprise stuff at the crack of dawn. With that in mind, here are my real time notes. There are definitely some new customer and product announcements. One thing Google isn’t announcing yet is any removal of the beta logos from Google Apps services.

Background: Google Apps, a suite of productivity services first launched in 2006, and has evolved from there. Today more than 1 million businesses use Google apps and “hundreds of millions of dollars” is generated in revenue. 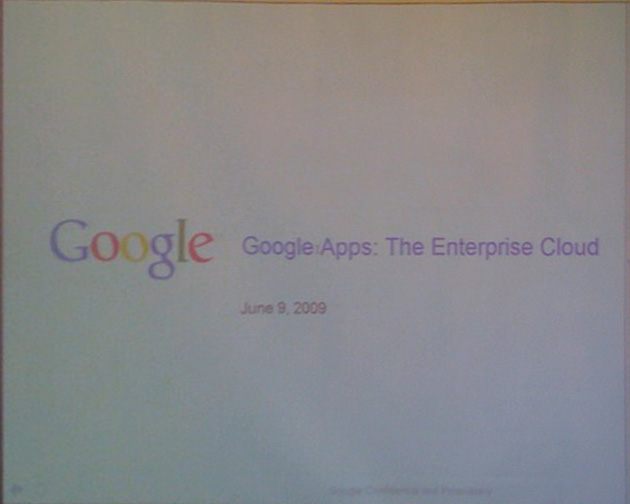 Dave Girouard, President Google Enterprise, says that we’re in an economic downturn, but that great companies thrive in downturns.

He’s talking about the history of Google Apps, which launched in 2004 with Gmail (see image below). Premier Edition launched in 2007 and Postini was acquired later that year. 500,000 businesses were announced in 2008 and Genentech deployed on Google Apps. The chart also shows the headcount dedicated to enterprise efforts at Google, rising from zero in 2004 to over 1,000 today. 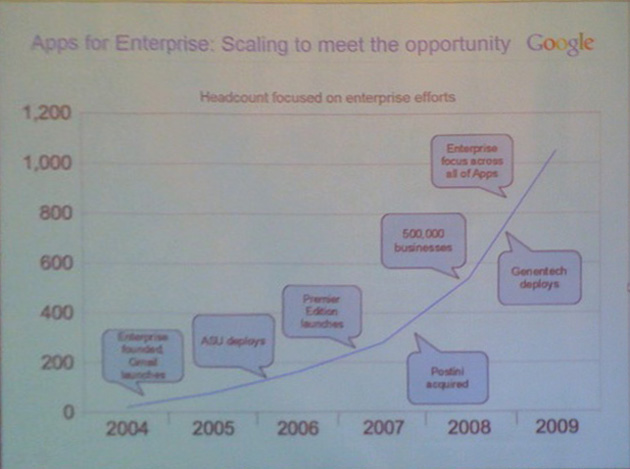 New stats Dave is announcing today: Google has more than 1.75 million businesses and 15 million users. More than 4,000 TB of mail is managed for Google Apps customers. 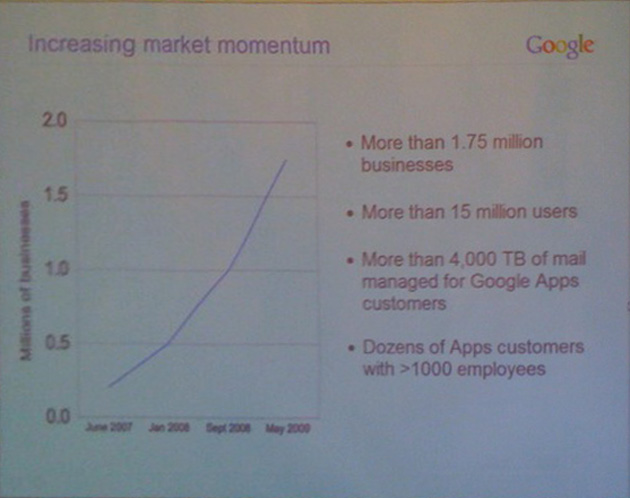 Dave says companies move to Google for three reasons: lower cost, constant innovation, happy end users. Google Apps costs companies $8.47 per user per month (Forrester). Microsoft Exchange online is $20.32. He’s also talking about reliability and uptime and the recently launched Google Dashboard. He says that Google is focused on transparency on any issues. And that Google is getting better at managing enterprise customers so that they have less downtime. 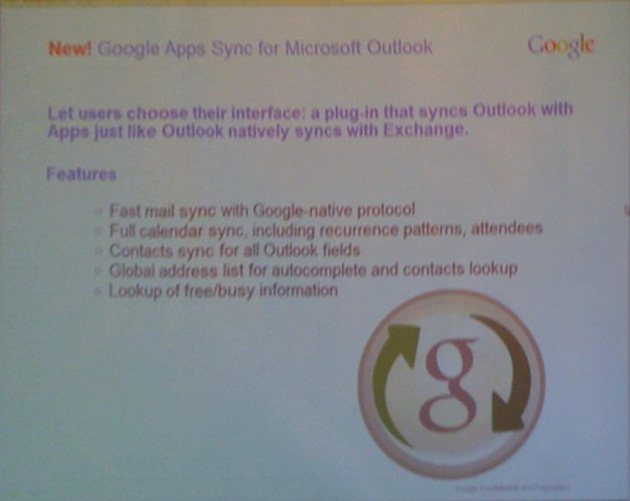 This effectively lets Google Apps users use Outlook as the interface to Google Apps. For users who don’t want to only use the browser to access email, calendar, contacts, etc., this is an awesome feature.

Google Apps Sync works only with Windows machines for now. No Entourage on the Mac.

Dave fielded a question about Google Wave and how it might integrate with Google Apps. Dave says “it’s gonna get into Enterprise’s hands as fast as we can.” He says traditionally products are baked on the user side and then moved to enterprise, but, Dave says, he wants to move things along more quickly.

If you are an individual user who wants to use this syncing product, you have to sign up for Google Apps Premier. You can then sync Gmail, Google Calendar and Contacts with Outlook. This is only Google Apps premier, so the free product won’t work.