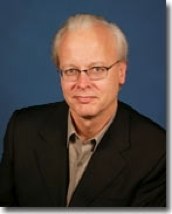 We’re at the Churchill Club’s “Potential of Cloud Computing” event, where Wired’s Senior Writer Steven Levy is interviewing Microsoft Chief Software Architect Ray Ozzie. Ozzie made some interesting predictions on the future of cloud computing a few weeks ago at J.P. Morgan’s Technology, Media and Telecom Conference. Microsoft is continuing to assert its position in the cloud as the release of its cloud computing platform, Azure, draws near. Ozzie faced a few hardball questions from Levy, which you can find our analysis of here.

Stephen Levy: The cloud as a term is being tossed around endlessly now. One CEO has said that there’s a lot of hype. When Microsoft talks about the cloud, what does it mean?

Ozzie: The cloud is a self service on demand way of accessing computation resources with a virtualized abstraction, that is relatively homogenous. Build on federated infrastructure, its a public service. The reality is that it is different from a developers perspective because you can treat it as a utility.

Levy: What difference will cloud computing make for users?

Ozzie: It’s fundamentally transformational…There are a lot of opportunities to bring the cloud to the consumer. He says different market segments want to consumer value in different ways, Enterprise requirements are drastically different. Facebook and Twitter are innovations in the social media reals-they deal with consumer dynamics. Organizational dynamics are dramatically different. Businesses are regulated. Companies are accountable for the nature of their employees. But many of the tools are the same across both the enterprise space and the consumer space. The key is trying to find tools who fit both the enterprise and consumer space.

Interoperability is the lifeblood of cloud computing.

Ozzie: It was a good code name. We examined the nature of how are best consumer properties were operating and took that service expertise and operating programmers and said, what would server operating systems look like. Ultimately, they brought it back together so there is coherence with server and cloud strategy. In essence, the nature of Windows Azure at one extreme (ahead of whats shipping ) will enable people to wrap existing windows server workloads in a way with as little change as possible to move up in a public or private cloud environment. Its laying out program design patterns and infrastructure-this is what an idea cloud computing structure looks like, this is how you build a program with the elastic ability to scale, etc.

We can only deploy Azure in geographical areas that are comfortable There will be data centers everywhere on the earth-we need to partner to federate clouds across the world. The maturity level at governments, even large ones, isn’t very high. We need to bring everyone together.

Levey: How many companies can build big clouds?

Ozzie: Not too many. I don’t know about Amazon. They are the leader. They have done amazing work. But the level to server enterprise deployments is substantial. We have so many companies who are using Exchange and Sharepoint who want to get into this infrastructure…it’s a big investment. The consumer technologies are what drove our competencies in house. Had we not kept MSN alive and invested in MSN, we wouldn’t have had competencies in house to benefit enterprises.

Levy: What’s your competitive edge when it comes to cloud computing over other tech companies?

Ozzie. There are five reasons: 1. Technology-Microsoft Research has been doing tremendous things 2. Operating systems: 3. Storage investments because of search. 4. Developer edge-5-7 million developers working on Microsoft stack. It’s a great market opportunity. If we can prove to them that we have a great infrastructure for their software, they will deploy it. There’s also opportunity with partners-there are going to be lots of opportunity for partners, like hardware partners to make money. 5. Enterprise- Exchange and Sharepoint are great ways to save money.

Levy: How big of a revenue opportunity is Azure?

Ozzie: Its a huge revenue opportunity but margins are lower. Competition is great-we will compute more with Amazon, VMware rather than Google. We’ll be going commercial soon on the low levels. But the high levels are exciting.

What really turns me on is the transformation that’s happening at the user experience level and how we use devices. There are so many different devices and types of devices in out lives. If you were designing an OS today for the experiences we have today, you would use devices in rich ways that are appropriate to device but leverage connection to the cloud. The programming model on top of the OS is what’s changing and the experience o top of the OS is changing. It needs to factor in the web at the center. There’s no reason that experiences in the browser have to be locked into the browser. If you are a web developer, what might you want to do with MS Office?

The reality is I don’t know what a netbook is. Its evolving into an inexpensive appliance like PC. People are buying them as inexpensive laptops. The more laptops there are out there the happier I am. There’s more opportunity to sell operating systems. India was a phone market not a PC market. But if there is a different price point, India can be a PC market.

Bill Gates is no longer accountable for our success anymore. Every company is shaped by its founders. Bill brought to the company a sense of a culture of crisis-any day two guys in a garage could take down a company. That culture, the fact that the company has been through competitive battle after competitive battle, people don’t get freaked out.