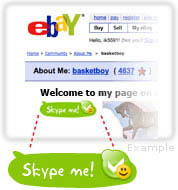 In the past we’ve written about eBay’s Skype conundrum, or the trouble the former has had to successfully integrate the latter’s communication capabilities into the e-commerce giant’s web services. In the recent press release announcing that eBay plans to spin off Skype as a separate company and file for an IPO in 2010, eBay President & CEO John Donahoe admitted as much when he was quoting stating that it’s “clear that Skype has limited synergies with eBay and PayPal.”

And now Skype is being downright disintegrated from eBay’s services, starting with the UK website. This is what the dry announcement message reads (emphasis ours):

eBay is discontinuing Skype voice and chat buttons in listings as of 10th June 2009 in an effort to remove features with limited buyer and seller usage.

This change does not require any action on your part. We are just notifying you that as of June 10, you will no longer see the Skype voice and chat options when you list new items, they will not be included on the new item page, and they will no longer appear in your existing listings.

We appreciate your continued commitment to good communications with your customers.

This comes as little of a surprise now, but I couldn’t help looking up former eBay CEO Meg Whitman’s words when the acquisition news – the company acquired Skype for roughly $2.6 billion ($1.3 billion in cash and the value of 32.4 million shares of eBay stock) back in September 2005 – hit the wire:

“Communications is at the heart of e-commerce and community. By combining the two leading e-commerce franchises, eBay and PayPal, with the leader in internet voice communications, we will create an extraordinarily powerful environment for business on the net.”

(Thanks to Daryl Griffiths for the tip)