Earlier this morning we stumbled across Hulu Desktop, an impressive new application from the popular video portal that lets you use your remote to control your Hulu experience. As it turns out, Desktop is only one of a set of new features Hulu is launching today as part of Hulu Labs, which is now live.

First, there’s Time-Based Browsing, which is the feature I’m going to be using most (aside from Hulu desktop). This allows you to see all new Hulu videos sorted by the day they appeared. Before now you could always sort individual shows in order, but if you missed a night of prime time it was up to you to figure out which shows you’d missed. Now you can just jump to that date under Time-Based Browsing and Hulu will do all the work for you. 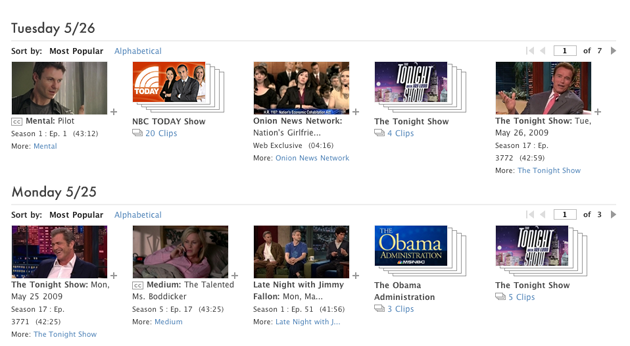 Labs also includes a new Recommendation feature that presents users with videos they might like based on their past actions (videos viewed and rated) on the site. Next to each recommendation, the site includes a note explaining why it thought you might like a certain show. It seems to work fairly well, though I don’t really understand how Fever Pitch was recommended because I’d previously watched Family Guy.

Finally, the Video Panel Designer will allow site owners to make a custom Hulu embed featuring multiple videos at once (they display a handful of video thumbnails side by side). Using the Designer you can specify exactly which shows you’d like to have appear in the panel, and you can also customize the color scheme, size, and layout.