What doesn’t kill you will only make you stronger. Adam Lindemann learned that the hard way with iMindi, a startup trying to create a “thought engine” that was skewered by our judges at last year’s TechCrunch50. “It almost destroyed us,” says Lindemann. But he and his team have completely redesigned the product, which creates a mind map of your thoughts based on semantic indexing technology, and lets you “merge” those thought maps with related ones created by other people.

It is still rough around the edges, but is a vast improvement over the original concept. Today, iMindi is launching in private beta, and we have 1,000 invites for TechCrunch readers (sign up here).

The drubbing iMindi received at TechCrunch50 last year was brutal. After Lindemann’s presentation (see video below), Mark Cuban, who was a judge, laid into him:

Lindemann and his co-founder Galen Kaufman were devastated. Investors wanted to pull out. “It was a complete disaster,” says Lindemann, “but it was the best thing that could have happened because they were essentially right. If we would have launched in September, we would have failed.”

The main problem with the original design was that users were expected to manually connect their thought maps to other people’s thought maps. It was very labor intensive, and it wasn’t clear why anyone would invest the time. There are still some UI issues, but the connections are now automated, and it is easier to dump in data from other places on the Web.

Let me take a step back and explain what iMindi is today and what it hopes to become. When you create an account, you are encouraged to sign up for different “think tanks,” which are topic areas of interest. These include “Innovation & Technology,” “Wealth and Finance,” Fashion and Style,””Travel and Adventure,” Sports,” “Pregnancy and Parenting,” and “Mind, Spirit, and Religion.” You can create your own think tank topics. Once you’ve signed up for a few think tanks, you are ready to enter your “thoughts” on that topic.

You can enter your thoughts directly, just like writing a blog post. Or you can cut and paste from blogs, articles, or other sources on the Web. (Soon it will be possible to ingest your existing thought stream from other sources, such as an RSS feed from your blog or your Twitter feed). Once you you are done entering your thought, iMindi runs it through its semantic index and creates tags for all the major concepts it recognizes. The concepts are hyperlinked in your post and presented as a thought map below. Clicking on any concept reveals other entries you have made with the same semantic tags. If they are truly related, you can “merge” the two thoughts and they will be connected on the mind map. 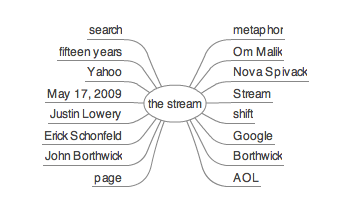 iMindi is still hit or miss in identifying and mapping the right concepts. For instance, I entered a post I wrote called “Jump Into The Stream” and it produced the mind map at right. It correctly identified the people mentioned in the post, a date, and the fact that the “stream” is a “metaphor” for information consumption related to another metaphor, “the page.” But other than “Yahoo” and “Google,” it failed to identify any of the smaller companies at the center of redefining teh Web in terms of information streams (Twitter, Facebook, FriendFeed, etc.). So its semantic index needs to get better, but it would be easy for iMindi to allow users to add their own tags or edit existing maps.

Where this becomes interesting is that you can also find other people whose posts/thoughts have created the same semantic tags, and merge your mind map with theirs. In this way, iMindi hopes to help you find like-minded people. Once you do find them, you can follow them and their thoughts in the think tanks where your interests overlap. The more people who merge their maps with yours, the greater your “mind rank.” You also can see everyone’s thoughts in a particular think tank as a stream when you explore that think tank. In this sense, iMindi shares an approach with Twine, which is also powered by a semantic index and lets you follow other people’s interest feeds.

Twine is much better funded and at a more mature stage of development. (Twine’s parent company, Radar Networks, has raised $18 million, whereas iMindi was built with only $500,000 so far). But iMindi’s focus on creating these mind melds is promising. We are increasingly drowning in people’s thought streams already (Twitter, Facebook, FreindFeed, you name it). iMindi today is still too much work. But if it follows through and lets you actually ingest these thought streams you are already creating and following elsewhere, it could be a valuable filter.

Imagine being able to map your entire Twitter stream, or the streams of individuals you are following, or just individual Tweets, and mapping those across time. Putting a semantic layer on top of Twitter, or any stream of content is a powerful way to explore related thoughts and concepts. The mind map connects related thoughts not by links, but by analyzing the underlying language used to express those thoughts. In a world of ever-larger information streams, we need better ways to navigate those streams. Semantic mind maps could be one way.

iMindi still has a lot of work to do before we get there. It needs to remove steps from the way it lets you create “thoughts” and link to other thoughts. Personally, I’d lose the think tanks concept or put it into the background. Right now, if you don’t look in the right think tank, you might miss a related thought if somebody entered it into another category. iMindi needs to let its thought engine do even more of the work in connecting thoughts together, or at least exposing them to users. Lindemann is aware of these limitations, and is keeping an open mind about how to make iMindi work. Sign up for the beta and give him your thoughts. 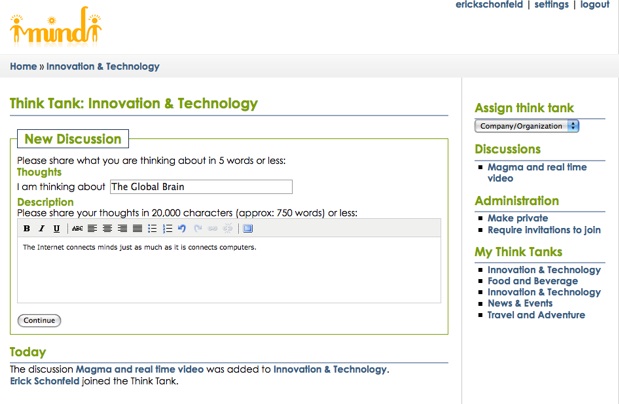