Wow, hats off to some of the eggheads at Carnegie Mellon. They’ve developed a touchscreen that can actually produce tactile buttons by using latex, acrylic, and a little air pump. Imagine a touchscreen-only phone that pops up little keys when you open the on-screen keyboard. It’s like haptic feedback on steroids.

According to MIT’s Technology Review:

Now researchers at Carnegie Mellon University have developed buttons that pop out from a touch-screen surface. The design retains the dynamic display capabilities of a normal touch screen but can also produce tactile buttons for certain functions.

Graduate student Chris Harrison and computer-science professor Scott Hudson have built a handful of proof-of-concept displays with the morphing buttons. The screens are covered in semitransparent latex, which sits on top of an acrylic plate with shaped holes and an air chamber connected to a pump. When the pump is off, the screen is flat; when it’s switched on, the latex forms concave or convex features around the cutouts, depending on negative or positive pressure.

Apparently similar solutions have been proposed in the past but none have been as full-featured and relatively affordable as Carnegie Mellon’s version. For instance, this version can register the amount of force applied to a button press, which can be used in UI design. Music playing software could use a harder button press to scroll through a list of songs faster while using a lighter press to scroll more slowly. 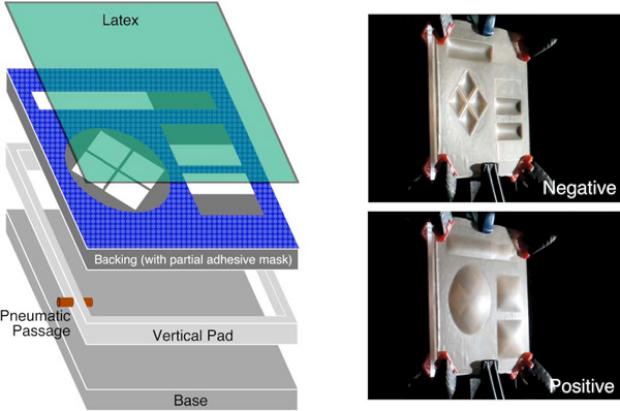 The current system is still pretty large thanks to the air pump, so early production versions will most likely end up in car dashboards. The team is exploring ways to shrink everything and believes that it’d ultimately be able to fit inside a cellphone.

Check out this video of the screen in action. Very cool.