Senseg.com is a haptic interface company based in Helsinki, Finland. I met with the CEO, Ville Makinen, who showed us two simple implementations of the system. 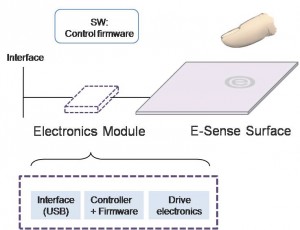 Instead of using vibrating motors, the devices are completely motionless. Instead, the Senseg system stimulates your fingers or hand with an electrical field to simulate the feeling of friction or texture. The only way I can describe it as being a cross between rubbing soft sandpaper and getting a static electric shock.

One obvious implementation would be for something like the iPhone. Because it uses no motors you can’t hear it and it doesn’t run down the battery. A small module – about as big as two sugar cubes – controls the sensation by connecting to a thin film that can be placed on any device. The film can even go around curves. The video you see here shows two demo products. One is a UI test with three distinct systems – a slider, a notched slider, and a rotating arrow. When you move your finger on each UI element you feel a different thing.

Makinen is working on some larger projects right now for museums and corporate clients but expects to have some working devices in production in a year. This could definitely change the way we interact with touchscreens.