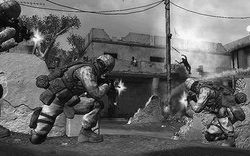 After heaps of protest, Konami will no longer publish Atomic Games’ Six Days in Fallujah, citing “reaction to the video game in the United State.” Now, Atomic Games could try to find another publisher, but that’s easier said than done. Obviously.

Konami doesn’t seem to know what it had gotten itself into. It told a Japanese newspaper that it didn’t know the connection between Atomic Games and the U.S. military. As far as Konami knew, apparently, Atomic Games could have done all its research via old episodes of Male Call on the History Channel. (Yes, I know Male Call had nothing to do with the Iraq War.)

The game was scheduled for release in 2010—not no more.

It’s a real shame, I think. Presumably it’s a timing issue—Lord knows there’s enough World War II games that do nothing but teach kids that it’s kill cool to kill Wehrmacht soldiers because they’re “Nazis.” Give it a few years and we’ll be swimming in Iraq War video games.

In any event, here’s hoping the project doesn’t turn into a complete waste of time for Atomic Games. No word from them yet, though.