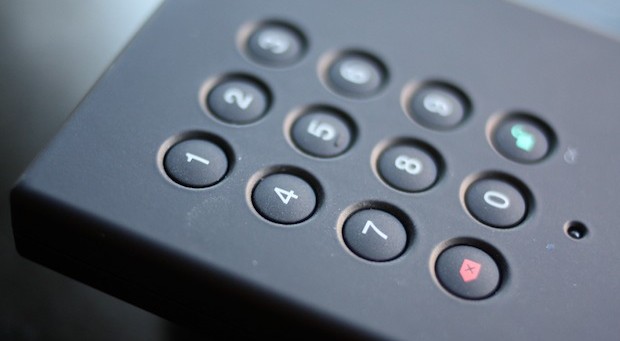 I’m sure we all have some data we’d like to squirrel away somewhere. Something you’d perhaps like to be only accessible to yourself. There are many ways to do this, but wouldn’t you prefer the security of a drive with an actual PIN pad on it? Well, whether you do or not, Lenovo makes one and you can certainly see the usefulness of such a thing. So is it any good?

This won’t be a long review. The drive works great. I received a 320GB version to test out, and was immediately impressed by the build quality. It’s compact, feels very solid, and is covered with the same grippy but satiny finish as Razer mice. I wonder if there’s a name for that stuff.

There’s a little slot that its built-in USB “tail” fits into, which never gave me any trouble but is probably a haven for crumbs if you keep this drive in your bag a lot. The tail is about 4 inches long, just enough to connect to a laptop comfortably, or (to my delight) hang like a leech off the back of your desktop. There is also a power cord, which is only necessary if you’re plugging the drive into a non-powered USB port. I didn’t have any trouble on my Mac or on the rear ports of my desktop. 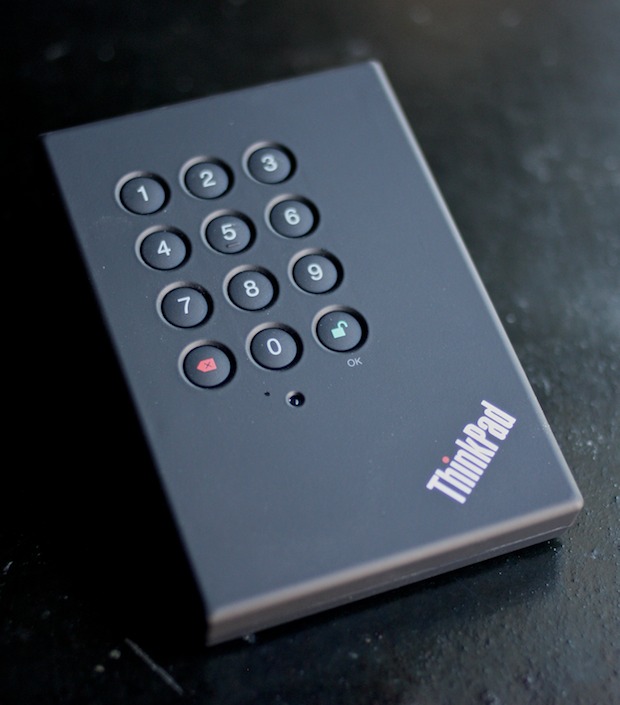 So the main event in this case is obviously the keypad. And I think it’s great. When you plug it in, nothing happens except an LED lighting up on the drive. This is your cue to simply put in your PIN and hit the green button. There can be several passwords that work, although I wish each PIN would give access to a different set of data — wouldn’t that be awesome? But no, since all PIN administration is contained on the drive itself, there are no complex permissions to be negotiated. You can enter admin mode and add or remove PINs, and while I eventually figured it out, it’s a bit difficult to tell what stage you’re at when the only thing the drive can do is show a light blinking or steady, in one of two colors. But I set it up with my PIN in a couple minutes, and then put the instructions somewhere I’d remember them — I suggest you do the same. The buttons themselves are slightly recessed, have a nice click, and feel like they could be pressed about a billion times before breaking.

Performance is fine; I didn’t do any quantitative testing because performance isn’t really the point of this drive. But it hums right along at expected USB2 speeds, and didn’t seem to choke with either large files or large numbers of small files. Transferring a bunch of 6GB+ files took as long as I expected and no longer. Noise is very minimal. 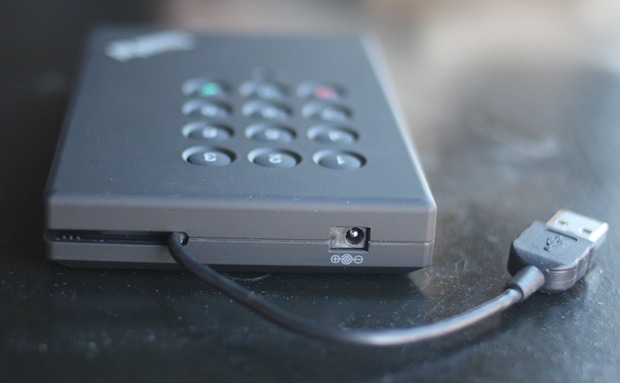 If you’re a secret agent or something, this would be a sweet thing to have. Actually, I think it’s probably good for just about anyone to have, if only for keeping secure records and that sort of thing. The trouble is it’s mighty expensive. Just over $200 is the cheapest I saw the drive going for, and since you can get a terabyte for half that, it’s pretty clear that Lenovo is aware they’re catering to a limited audience that cares primarily about security, not dollars-per-gig. If you’re a privacy-conscious person and want a well-put-together drive with easy and functional security (and don’t mind paying a premium), then this is a great choice.