http://blip.tv/play/grEx+uUDieRU
Durabook sent over one of their semi-rugged notebooks for testing and we had a whole series of test planned. However, the notebook failed the first and most basic test: a 2 foot drop. We initially planned to let a group of toddlers play with it, and even run it over with a Suzuki GSXR 600 sport bike. The fun stopped with the drop though. Thankfully, we got it on video, which is after the break along with a short review of the borked notebook.

I’m not that impressed with the Durabook. The computer is underpowered, the screen dull, and the software suite weak. It looks nice though, which is a rare find within the world of rugged notebooks. Also, lets not forget the video above where the notebook didn’t survive a little drop onto bricks.

As far as notebooks go, this guy sports older tech with a Core 2 Duo CPU, 1GB of ram, 160GB HDD and Windows XP (that’s nice though). It’s above the curve within the world of durable notebooks, easily out-computing Panasonic’s Toughbook line. But remember, it doesn’t perform like a Toughbook and therefore shouldn’t be compared to that line but rather like a standard notebook. Even the screen is a disappointment. It’s dull and a glare magnet as the video above shows.

Overall, the whole package is a utter disappointment especially considering the screen cracked with a 2 foot drop on to brick. I know my old G4 iBooks have hit the ground from higher than that numerous times, and they still work fine. I really wanted to do more tests with this notebook. I even built a special ramp for my buddy’s bike. I think he was disappointed more than I though. It’s not everyday you get to run over a brand new notebook. Ah well. 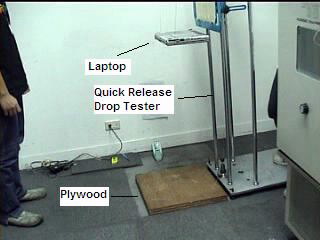 UPDATE: GammaTech wants me to clarify some things. I failed to conduct the test properly by dropping the semi-rugged notebook directly onto bricks from under 24-inches. I was suppose to drop it onto 2-inch thick plywood over concrete from 29-inches up, which GammaTech claims the Durabook survived 26 times in the lab.

Unless the tester shown in this pic which was included in the testing documentation is a ‘little person,’ that test is a hell of a lot higher than 29-inches. I think it needs to be pointed out too that if the plywood in the same pic isn’t secured down to the floor, the testing is skewed anyway and doesn’t provide a true test of the ruggedness of the notebook. When the notebook is dropped onto that testing surface, the impact will be absorbed by the bounce back of the plywood from the downward force of the 6lb-ish notebook. My hardwood floor doesn’t bounce. Just saying…