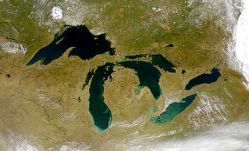 If you’ve been using the recently released Google Earth 5.0 to check out what the oceans look like from beneath the water surface (tip: use the flight simulator to fly underwater), you’ll be happy to know that the company has extended that capability to the “Third Coast” of the U.S., meaning the five Great Lakes of North America (Superior, Michigan, Huron, Erie, and Ontario) that form the largest group of freshwater lakes on the planet (roughly 22% of it according to Wikipedia).

Through a cooperative effort with the NOAA Great Lakes Environmental Research Laboratory (GLERL) and the NOAA National Geophysical Data Center, Google Earth now incorporates detailed bathymetry for the five Great Lakes. Users will be able to explore features such as the canyons and shoals in eastern Lake Superior, the Lake Michigan mid-lake reef complex, and the old river channel, now underwater, that once connected Lakes Michigan and Huron at the Straits of Mackinac.

Let us know if you find the lost City of Atlantis in those lakes somewhere.