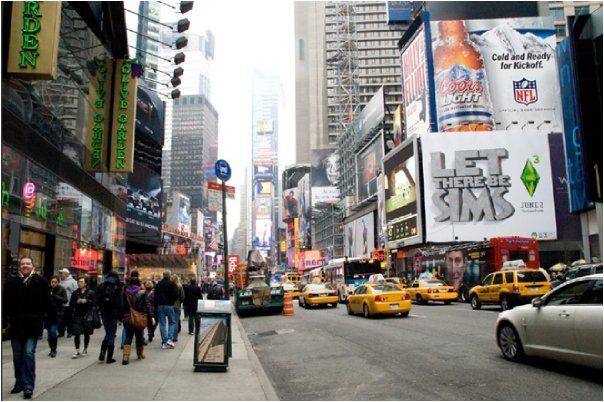 Considering that, on average, some 40 million people walk through Times Square per year, you’ve got to assume that EA has high hopes for The Sims 3. You don’t spend that kind of money on billboards promoting the game—billboard in Times Square, depending on location, costs in the tens of thousands of dollars per day—without thinking, “Yup, this game will carry us right through Christmas.”

Yes, friends, EA has been hard at work propping up The Sims 3 posters and billboards all over this fine country.

Featured prominently in the ads is the little green selector reticle, or whatever you want to call it. The thing that floats above the characters’ heads as you live their lives more interestingly than you live your own. That’s how it was when I played The Sims five years ago.

So, yeah, the game’s out on June 2, and I know absolutely nothing about it. Well, I know that that guy from Games for Windows left Ziff Davis to work on Sims-related stuff, but that’s hardly what I would consider interesting in the traditional sense of the word.