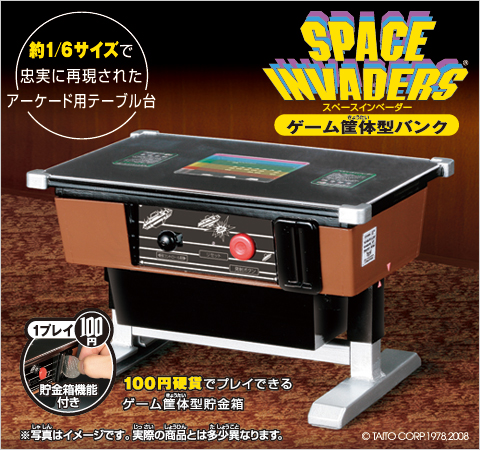 I must have shoved unimaginable quantities of quarters into various arcade games over the years, trying desperately to reach that next level, or defeat the next boss. If I could have put those into a piggy bank, rather than the coffers of some sweaty arcade owner, I might be in a different place right now. Alas, the short-term reward for putting money into a piggy bank just can’t compete with the visceral reward of the blinking lights of a video game. Until now! Those crazy Japanese have created a piggy bank that incorporates a playable version of the venerable Space Invaders!

Genius. That’s all I can say. You can teach your children responsible fiscal stewardship without them ever catching on to your sinister educational plans! Indeed, the kids are rewarded for saving more by increased difficulty in the game: for each additional coin you insert, another Space Invader joins the fray!

Alas, this looks to be only for Japan. No word on when it might reach the States, or whether it’ll accept our nearly valueless currency.