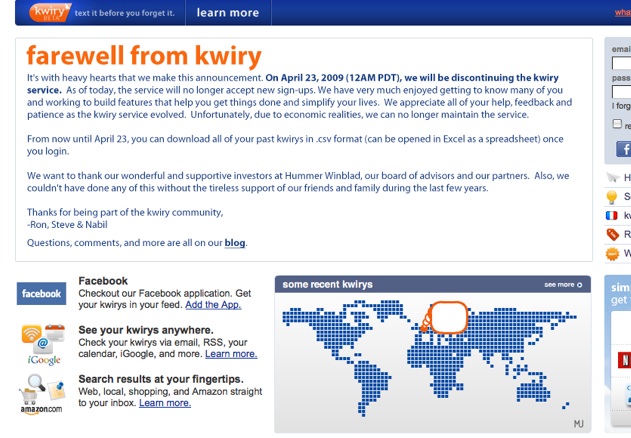 When SMS reminder service Kwiry launched back in December, 2007, I wondered whether anyone would use it. We now have our answer: not enough people to keep it going. The company sent out a notice today to users, also on its Website, that it will be shutting down on April 23, 2009.

Kwiry allowed you to text a keyword from your phone and get back an email with links to search results for that keyword. It was supposed to be a simple way to remind yourself of things. Later, it expanded to other ways to use SMS, such as to update your Netflix movie lineup. But it didn’t really solve a pressing problem. There are easier ways to remind yourself of something than sending yourself a search results page via clunky SMS. The bigger issue I think was that these reminders were for yourself instead of being aimed at other people. People don’t want to talk to themselves, they want to talk to other people, which is why communication-based services always have an easier time gaining traction.

The founders wrote a farewell note on their Website today saying:

As of today, the service will no longer accept new sign-ups. We have very much enjoyed getting to know many of you and working to build features to help you get things done and simplify your lives. We appreciate all of your help, feedback and patience as the kwiry service evolved. Unfortunately, due to economic realities, we can no longer maintain the service.

From now until April 23, you can download all of your past kwirys in .csv format (can be opened in Excel as a spreadsheet) once you login.

At least Kwiry is doing the right thing by letting users take their data out of the system before the servers get turned off.