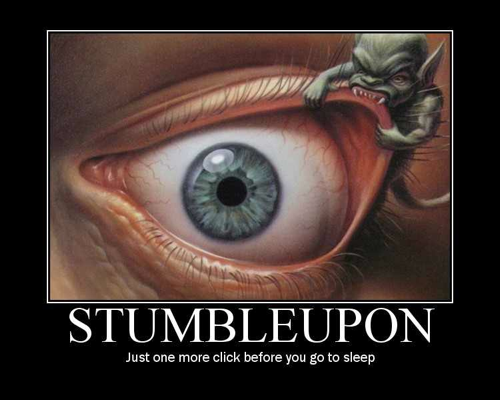 Back in September, we reported that eBay was attempting to sell off StumbleUpon, the website recommendation service it bought for $75 million in 2007. That didn’t happen. And now the company has been spun off to start life over as an independent startup, backed by new investors and the original founders.

The new company is led by co-founder Garrett Camp, who now steps into the CEO role. Co-founder Geoff Smith also joins Camp in returning to lead the company, but in an unannounced role. The company is backed by Sherpalo Ventures, Accel Partners, and August Capital. David Hornik from August Capital and Sameer Gandhi of Accel Partners join the board.

“The company is amply funded. And everyone is glad that the company is away from eBay,” a source tells us. eBay had previously been looking for a minimum of $75 million for StumbleUpon. It’s likely the spin out valuation was significantly lower than that. Our understanding is that Sequoia placed a competing bid, but Camp and investor Ram Shriram went with Accel and August Capital.

And StumbleUpon’s traffic has been falling in the past year. In February 2008, the site was at 2.6 million unique visitors. But in February 2009 that number was down to 1.4 million, according to comScore (chart below). Of course, traffic numbers are a bit odd to use with StumbleUpon because the service doesn’t require that you visit its actual site if you use its popular web browser toolbar. But last year it launched a frame-based toolbar that kept you on the StumbleUpon domain in a way similar to what Digg is now doing with the DiggBar.

Similarly, just as the DiggBar allows users to shorten URLs, StumbleUpon had been working on a way to do this using the Su.pr domain.

This news comes at a time when reports are circulating that VoIP company Skype’s founders are also trying to rip it back out of the hands of eBay. That may be a bit more complicated as eBay bought Skype for a cool $3.1 billion back in 2005.

In its former life as a startup, StumbleUpon raised a $1.5 million seed round of funding in December of 2005. 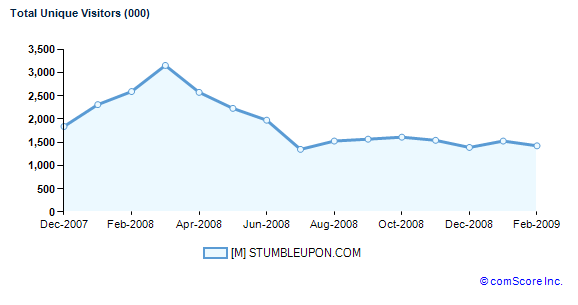 Below find the press release:

April 13, 2009 – StumbleUpon, the best way to discover new content on the Internet, today announced that after nearly 2 years as a subsidiary of eBay Inc., it has returned to the ranks of an investor-backed startup.  StumbleUpon is now backed by the original company founders, Garrett Camp and Geoff Smith, as well as a number of well-known investors including Ram Shriram of Sherpalo Ventures, Accel Partners, and August Capital.  Camp takes on the role of CEO of StumbleUpon.
“We are grateful to eBay for its guidance.  However, we realized there were few long-term synergies between the two businesses. It is best for us to part ways and focus on our respective strengths,” said Camp. “This change makes it possible for StumbleUpon to continue to innovate and focus on becoming the Web’s largest recommendation service.”

“StumbleUpon helps users discover the best of the web – it’s a way to find interesting content you wouldn’t think to search for,” said Shriram. “StumbleUpon’s personalized recommendation engine brings serendipity back to websurfing, and lets users sift through socially-endorsed content with a single click.”

StumbleUpon will remain focused on helping people discover interesting content by increasing the accessibility of the StumbleUpon service and the quality of recommendations.  In addition, StumbleUpon has plans for several new products and features to be released in the upcoming months.

About StumbleUpon
StumbleUpon discovers Web sites based on your interests, learns what you like, and brings you more.  With more than 7.4 million users and 425 million recommendations per month, StumbleUpon is the leading way to discover great content on the Internet.  More than 20,000 advertisers are using StumbleUpon to promote products and services.  Founded in 2001, StumbleUpon is based in San Francisco and backed by the same investors as Google and Facebook.  For more information, visit www.StumbleUpon.com.