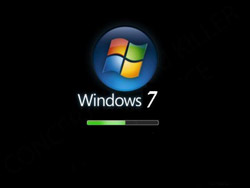 You guys really love Windows 7! One of those fancy research firms conducted a poll and found that 44 percent of people (IT professionals) said they were “very satisfied” with the beta. Finding 44 percent of people to agree on anything is hard enough, but to find these people showering Windows 7 with love must make Microsoft a very proud papa indeed.

Here’s where we bash Vista, because it’s fashionable to do so: at the a similar time in the beta life cycle, Vista could only find 10 percent of people who were satisfied. Clearly Microsoft is doing something right here.

And let’s go ahead an define “something right”: faster boot times, less consumption of memory, etc. Sounds like what Vista should have been from the get-go, right?

Speaking of Vista, it’s looking more and more that, years from now, people will answer the question “Remember Windows Vista?” with “Vista? What the hell are you talking about?” In the same survey that found people in love with Windows 7, 55 percent of business said they plan to skip Vista altogether, and just wait for Windows 7 to launch. (A release candidate is scheduled for release next month; the operating system should launch by early 2010, three years after Vista launched.) That’s how annoyed people are with Vista, which, to be fair, has a worse reputation than it deserves, if my brief playing around with it is any indication of its merits.

Now is the part where I ask y’all how Windows 7 is treating you. Right after the beta’s release, many of you seemed pretty happy with it. Doug, Dave and Devin (our resident Windows users) seem to like it, too, judging by their chat room comments.