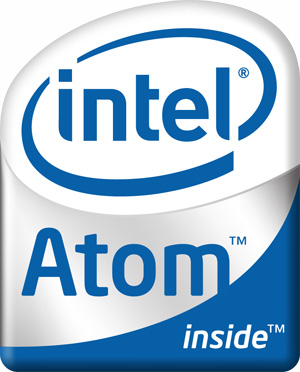 The Intel Atom had a great first year. There probably wasn’t a day on CrunchGear where we didn’t announce or talk about a random gadget powered by the the Intel CPU. The new models keep on rolling too, with two new options announced today. One, bumps the CPU into previously unavailable speeds, and the other should find its way into MIDs.

The new Atom Z550 maintains all the Atom goodness, but comes in at 2.0GHz. This speedy, power-smart chip should hopefully make its way into the next generation of netbooks, nettops. It seems that the power is finally available in these chips to take over from the aging Celeron lineup for simple tasks. There is no reason why a 2.0GHz Atom couldn’t power a great email/photo storage computer. You know, something your parents would find acceptable.

The other new chip, the Z515, speeds up the the clock in handheld devices. This guy is capable of running at 1.2GHz in burst mode, but the idle speed is 800MHz. The slower clock speed, of course, dramatically lowers power consumption and improves battery life. Still, the chip should out preform the current gen thanks to a more efficient design.

Chandrasekher was joined by two other Intel executives, Craig Barrett and Pat Gelsinger, whose keynotes focused on the company’s directions for the next year and beyond. The event, held at the Renaissance Beijing Capital Hotel, was geared toward the Chinese market in support of local innovation and Intel’s industry leadership in the region.

During his keynote, titled “Mobility’s Next Wave of Growth,” Chandrasekher demonstrated the first live demo of Intel’s next-generation Atom-based MID platform, codenamed “Moorestown.” Chandrasekher provided a sneak peek into the low-power innovation of the platform by showcasing a greater than 10x idle power reduction compared to today’s Atom-based platform in a side-by-side demo. This dramatic reduction is made possible through a combination of new power management techniques, a new partition optimized for the MID segments and Intel’s Hi-k 45nm manufacturing process.

Due in 2010, the Moorestown platform is comprised of a System on Chip (codenamed “Lincroft”) that integrates a 45nm Intel® Atom processor core, graphics, video and memory controller, and a companion input/output (I/O) hub (codenamed “Langwell”). The platform will be accompanied by a new Moblin software version that is optimized to enable the rich, interactive, PC-like Internet experience along with cellular voice capabilities.

Intel also announced two new Atom processors for MIDs: the Z550 and Z515. The Z550 extends the performance of the MID product line to 2GHz with Intel Hyperthreading technology support, setting a new standard for the highest performance processor in the under-3-watt power envelope. The Z515 incorporates the new Intel® Burst Performance Technology (Intel BPT), which enables the processor to run at 1.2GHz when performance is needed in existing small and sleek MID form factors.

Discussing Intel Centrino 2-based laptops, Chandrasekher pointed out additional OEMs choosing to include Intel ultra low-voltage processors to create ultra-thin laptop designs that are less than 1 inch thick. While lighter in size and weight, these notebooks still offer great performance and battery life consumers have come to expect. Chandrasekher then described the next-generation processors for laptops based on the Nehalem architecture that will be available in the second half of this year on the “Calpella” platform. These processors will be more powerful then their predecessors by including such technologies as Intel Hyper-Threading Technology and Intel Turbo Boost Technology.

Gelsinger said Intel and the industry now look to adopting more mainstream PC and laptop versions of the Nehalem microarchitecture, including 32nm manufactured versions with on-processor graphics, as well the multi-socket Nehalem EX server processor, all in production in the second half of 2009. The future Nehalem-EX processor will provide eight cores for the multiprocessor “intelligent server” market.

For embedded computers, Gelsinger discussed a range of recently announced Atom processor solutions with industrial temp for applications such as in-vehicle infotainment and industrial automation. He also disclosed, for the first time ever, the Nehalem-EP based processor (codenamed “Jasper Forest”) that is specifically designed to deliver increased compute density and integration required for embedded and storage applications.

Gelsinger also addressed Larrabee, which is Intel’s first many-core architecture designed for high throughput applications and features a programmable graphics pipeline that enables developer freedom. The Intel executive discussed availability of a C++ Larrabee Prototype Library and a future parallel programming solution based on “Ct” technology. The first Larrabee discrete graphics products are due in the late 2009/2010 timeframe.

During the conference’s opening keynote, Intel Chairman Craig Barrett described how technology is a tool for improving education, health care, economic development and the environment. He challenged the developer community to use its collective technology expertise to develop solutions that tackle these challenges.

“Nothing beats investing in good people and good ideas,” said Barrett, whose conclusions are drawn from observations from trips to more than 30 countries a year. “Public-private collaboration is fundamental in driving solutions that confront global challenges.”

Barrett announced that Intel had selected the four winners of the INSPIRE•EMPOWER Challenge he launched last August. The winners will each receive $100,000 to further fund their innovative solutions that apply technology to address unmet needs related to education, health care, economic development and the environment.

The INSPIRE•EMPOWER Challenge winners are: Bibek Chapagain of Winrock International in Kathmandu, Nepal; Daniel Fletcher of the University of California, Berkeley; Eric Morrow of the Maendeleo Foundation in Kampala, Uganda; and Michael Potts of Catholic Relief Services in Nairobi, Kenya. Details on the winning solutions are available at www.intel.com/pressroom.