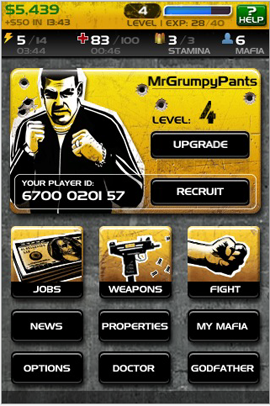 The game revolves around building up a virtual mafia family with other members, earning virtual cash to buy weapons, and performing ‘jobs’ to earn more. While the gameplay is primarily text based, Mafia Wars has an impressive interface and array of graphics that make it feel more polished than some knockoffs, which often are filled with clunky text fields. And as I’ve said about other similar games, while Mafia Wars may not look like much fun at first glance it can become very addictive.

One apparent omission in the iPhone app that will frustrate veteran Mafia Wars gamers is that there’s apparently no way to link to mobile game to your profile on social networks. This is a bit odd given that Zynga has previously used Facebook Connect integration on its Live Poker application, and I’ll be surprised if we don’t see it as a feature in a future release (though Zynga may have purposely omitted it to start with a new level playing field).

Mafia Wars is one of a handful of primarily text-based games that have become very popular on sites like Facebook and MySpace, and have also had more than their fair share of drama. The trend kicked off with the release and huge popularity of Mob Wars, which was built by a former employee of SGN named David Maestri as a side-project (a lengthly legal battle ensued as SGN tried to lay claim to the game, with the two parties finally settling in December). Zynga also got in on the action with Mafia Wars, which now garners a whopping 9,209,083 monthly active users on Facebook alone. In an attempt to defend Mob Wars (which only has a fourth of Mafia Wars’ user base on Facebook) Maestri is suing Zynga for copyright infringement.

Other mob-based games on the App Store include SGN’s Mafia: Respect and Retaliation and iMob.