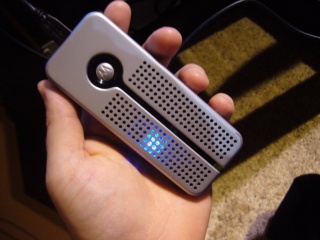 Motorola has been talking about making a USB device capable of moving your video and other media via Wi-Fi and Bluetooth since last year, and they are continuing to talk about it. They aren’t talking about when it will be released or how much it will cost, but they are talking about what it’ll do.

Designed to be a bus powered USB solution, the Moto MOVR will transcode your video from any source, and then broadcast (either via streaming or transfer) the content via Wi-Fi to cellphones and computers. At a recent trade show, Motorola was demonstrating this ability to a Q9 cellphone, a laptop, and an iPhone.

Again, Motorola ain’t talking about when it’s coming out, or how much it’ll cost, but it seems like a pretty sweet gadget. Let’s hope it makes it to market.

[via Zatz not funny]