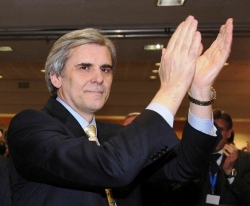 For your Saturday morning reading: Channel4 reports that the new President of the Referees’ Assocation in Italy wants to stop officials from participating in conversations on social networking sites and message boards, and refrain themselves from blogging. The President in question, Marcello Nicchi, was only elected to the position last month and one of his first moves was the release of a list of “rules for privacy and institutional communication protocols.”

In Italy, it’s generally forbidden for football (that would be soccer) referees to make any public statements in the media even after a game has finished. The memo presumably simply wants to make it clear to the officials what the Association understands ‘media’ to encompass, so it included a detailed list of what they should be avoiding. Literally, the message translates as: “referees are barred from making statements in public including via email, their own websites, mailing lists, forums, blogs or discussion groups such as Facebook and similar systems.” Officials who break the rules will be deferred to the Disciplinary Commission.

Strangely, this contradicts earlier reports that Nicchi was actually thinking of ‘revolutionizing’ Italian football by scrapping the rule that prevents officials from being interviewed by the media about finished games. We intend to get to the bottom of this, of course, because the public needs to know what is really going on here!

Meanwhile, anyone else is still free to bash the referees on social networks, forums and blogs, so no harm done really.