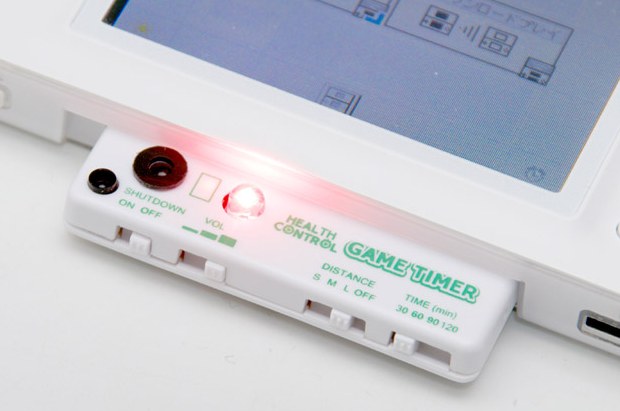 The DS is the favored accessory all over Japan, and like every other game or electronic device there, some people find themselves playing it until they nearly die. What it is about that island nation that makes people do this, I don’t care to guess, but the fact is some people need an electronic mom to flip the switch when it’s clear they’ve been playing too much.

The Health Control Game Timer (Japanese) is designed to do just that, so if you’ve found yourself bent like a tree and light-headed after a marathon Advance Wars session, this may be in order.

It plugs in like a GBA cartridge (video here), then monitors the time you’ve been playing — and how close your face is, which I guess could be problem for some. It has a little LED that flickers when it’s time to stop, and then it unceremoniously turns the thing off, never mind whether you’re in a boss battle or whatever. Lots more pictures here.

Of course, this is one of those things that only works if you want it to work, like other alarms; you can always keep hitting the snooze button. But for those of us who have lost track of time playing a game (who among us is innocent?) and just need a reminder that it’s been an hour or two (or three), this seems like a handy little accessory.