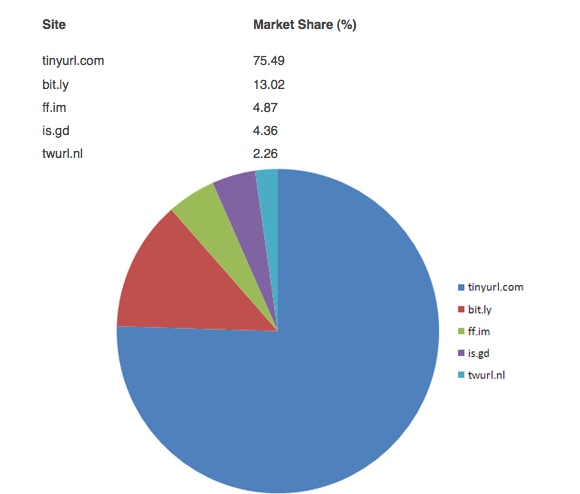 In a world where everything is being jammed into 140 characters or less, shorter is better. That goes double (or is it half?) for lengthy URLs. So-called URL shortening services are increasingly becoming indispensable to anyone who uses Twitter. It is the only practical way to share links on the service.

Today, one of these URL shortening services, bit.ly, raised $2 million, sparking the question: How much are these things actually worth? Nobody really knows.

But here is some fun math. Assuming bit.ly sold 20 percent of its shares to its new investors (the O’Reilly Alpha Tech Fund, Mitch Kapor, and Howard Lindzon), that would imply an $8 million pre-money valuation ($10 million post-money). Its market share of shortened links, as calculated by Tweetmeme, is only 13 percent. The biggest URL shortner out there is actually TinyURL, which commands a 75 percent share. So by that metric, if bit.ly is worth $8 million, TinyURL should be worth at least $46 million (8/13 X 75 = 46.15). Yes, I am making up these numbers, just like the investors do.

But wait. Bit.ly seems to be shooting up like a rocket, while TinyURL may have plateaued. Why is bit.ly growing so much faster? One big reason is because it creates even shorter URLs than TinyURL does by about five characters (http://bit.ly/ versus http://tinyurl.com/). Don’t laugh. Every character counts. Bit.ly also offers better analytics and tracking tools on the backend.

Don’t get too caught up in the site traffic growth figures either, though. Traffic to http://bit.ly/ and http://tinyurl.com/ cannot be trusted as reliable proxies for usage because heavy users don’t go to the corresponding websites. They use desktop clients or browser based tools instead which incorporate one service or the other. For instance, TweetDeck (a popular Twitter client) uses bit.ly as its default shortener. The bit.ly service itself is a spin-off from Betaworks, which is also an investor in Tweetdeck (and in Twitter). See how it works?

How any URL shortener is supposed to make money is still unclear. The links themselves act as pass-throughs to the original sites. TinyURL has slapped some Google ads on its site and bit.ly doesn’t even bother. The data each service is collecting might be valuable and could be packaged in various ways to brand marketers or other corporate buyers . . . perhaps. Or more likely, these things become features of other services.

Already Digg is working on its own URL-shortening toolbar wrapped into its service, and Stumbleupon is working on su.pr, which is even shorter than bit.ly!