Convincing people to pay for nothing, or rather for things with zero marginal cost to produce, is a great business model—in theory. In practice, there are so few examples to point to, and most of them are overseas, such as Helsinki-based teen virtual world Habbo. The virtual world’s parent company, Sulake, today reported some selective financial and user data for Habbo. In 2008, Habbo’s revenues rose 20 percent to $74 million (50 million Euros), and posted positive operating cash flow (EBITDA) of $7 million (4.8 million Euros). It was even slightly profitable on a net income basis as well, however the company chose not to disclose that exact amount.

Perhaps the bulk of revenues are being plowed back into global expansion or to pay the salaries of Habbo’s 300 employees (yes, 300). But its sub-10% margins so far are underwhelming. And Habbo is supposed to be one of the shining examples of a real business based on a virtual economy. It also makes money from advertising, but the vast majority of its revenues comes from in-world gifting and virtual vanity items.

Habbo says it attracts 11.5 million unique visitors a month (based on internal Google Analytics data) and that more than 120 million Habbo characters have been created. How many have been abandoned, though, is unclear. ComScore estimates 8.7 million worldwide unique visitors in February, down from 9.3 million in December.

By year-end 2008, the global Habbo community had also grown in activity to 121 million Habbo characters with the number of returning visitors increased by more than 40 percent. Traffic to the teen virtual world also reached an all-time high in December, with more than 11.5 million unique visitors. Most of that is in other countries than the U.S., where interest seemed to peek in October with 2 million unique visitors. In February, the number of U.S. unique visitors was down to 1 million, according to comScore. 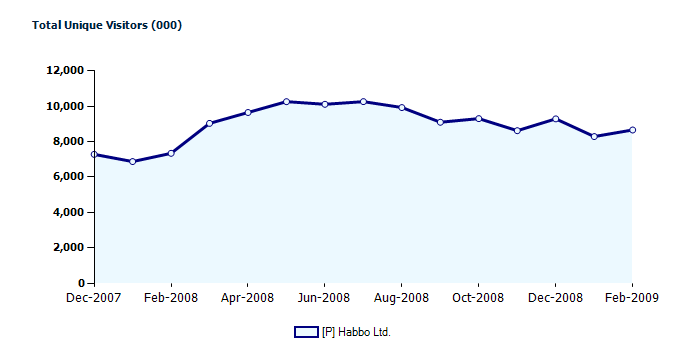