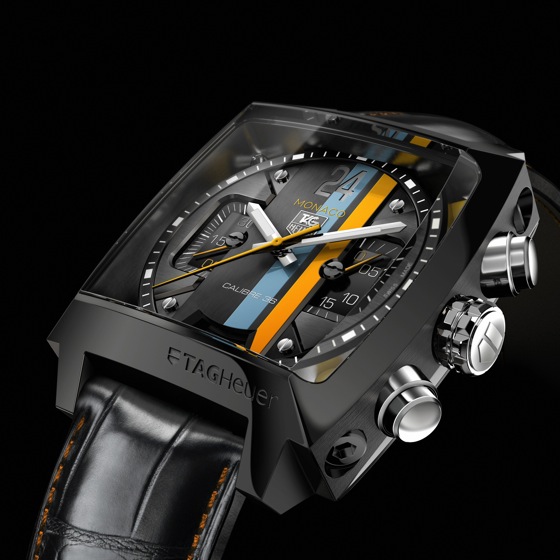 Tag has launched a number of retreads and a new concept at Basel this year. The Monaco chronograph, worn by Steve McQueen in the movie Le Mans way back in 1971, is a TH stalwart and they’ve been tweaking the timeless design for years. This year they have a concept chrono with 36,000 bph movement that “floats” inside the case to ensure shock absorption even in a 20 meter fall.

I’m not a big Tag man myself but you have to admit the square face and movement make this a bit nice than their low-end F1 racing watches you see on the daily.

The most avant-garde MONACO ever
TAG Heuer is unveiling its most advanced timepiece to date: the MONACO Twenty Four Concept Chronograph, a cutting-edge creation inspired by the supercharged race cars of the 24 of Le Mans.
The luxury watch carries an oversize “24” at 12 o’clock and the emblematic blue and orange livery of Gulf Oil – the same colours TAG Heuer Ambassador Steve McQueen wore in his 1970 film classic, Le Mans.
Based on the iconic exterior of Steve McQueen’s square-shaped Monaco, the concept watch’s unique tubular design and extreme shock-protected components are directly inspired by GT racecar technology. An innovative wonder with a unique two-part, see-through dial in an oversized, very contemporary case (40.5mm), the MONACO Twenty Four Concept Chronograph is powered by the superlative TAG Heuer Calibre 36 Movement (beating at the stunning speed of 36.000 beats/hour relentlessly as the engine of a Le Mans prototype running at 350 km/h), visible from the front and through its sapphire crystal caseback. Seriously sleek and high-tech, this daring creation of TAG Heuer’s newly expanded R&D department is a triumph of lightness and transparency, yet it looks like it could go 400 kilometres an hour down the endurance race’s fabled Mulsanne Straight.
Jean-Christophe Babin, TAG Heuer CEO and President: “The MONACO Twenty Four Concept Chronograph is inspired by the phenomenally powerful race cars – true marvels of state-of-the-art engineering and design – that compete each June in the 24 Hours of Le Mans. Our proud link to this historic race began 40 years ago, when our first brand ambassador, Jo Siffert, was the fastest man on the track, and the first Monaco, the supporting star on Steve McQueen’s wrist in Le Mans, was the hottest watch on the circuit. Ever since, the Monaco has showcased TAG Heuer innovation and creativity, both in its ever-evolving rollout of best-selling editions, and in its award-winning Concept Versions. From Jo Siffert and Steve McQueen in 1969 to Lewis Hamilton in 2009, from the vintage version to this most futuristic creation yet, the Monaco legacy pushes TAG Heuer ever forward.”
The sophisticated concept watch is the latest in a series of groundbreaking concept watches on the mythic watch of Steve McQueen. In 2003, the double-sided MONACO Sixty-Nine won the coveted Design Watch of the Year Award at the Grand Prix d’Horloge in Geneva. In 2004, the belt-driven MONACO V4 was named Watch of the Year by Wallpaper* magazine and “Best of What’s New” by Popular Science. In 2007, the MONACO 360 LS Concept Chronograph, the world’s most accurate wrist chronograph, was awarded the prestigious iF Design Award.
Inspired by the most robust and powerful GT cars in professional motorsports:
In a world first, the MONACO Twenty Four Concept Chronograph’s powerful TAG Heuer Calibre 36 movement “floats” inside a black PVD case, suspended within an “energy manifold” steel-tube housing very much like a race car’s driver’s protective cockpit cage. The components inside the polished black PVD-coated case (based on the MONACO V4 case) are further insulated with a shock-absorbing “composite filter” material used in aerospace and auto racing. The manifold arms collect vibrations and direct them away from the movement and into the composite filter, which absorbs and dissipates their energy.

Another never-before-seen innovation is the watch’s centrifugal system: the three arrows on the annular oscillating weight, visible from the front of the dial and through the sapphire crystal caseback, display its working rotation. Custom built in industrial-grade tungsten, the oscillating weight echoes a GT car’s chrome mags. The large-faced, black-textured dial bears an oversize “24” at 12 o’clock, in honour of the 24 of Le Mans.
The innovative two-part dial’s semi sub-counters at 9 and 3 o’clock have “doubled” hands: on the 3 o’clock, for example, the first part of the hand displays 0 to 15 minutes when the other part of the same hand passes under the upper dial.

Water resistant to 100 metres, with anti-reflective double-sided treatment on the curved sapphire scratch-resistant crystal glass to ensure the best readability, this superlative timepiece impressively reveals the direction the Monaco myth will take over its next 40 years.

The MONACO Twenty Four Concept Chronograph is equipped with a revolutionary new shock absorber, the Advanced Dynamic Absorption System (ADAS).
Unlike a conventional watch’s Incabloc shock protection system, which only protects the escapement from external shocks, the ADAS protects the movement in its entirety, not just its regulating components.
The MONACO Twenty Four Concept Chronograph is thus able to withstand an impact of 24,000 G, the equivalent of a 20-metre fall.