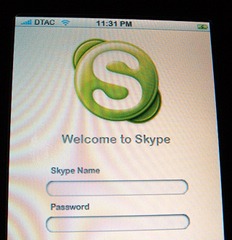 Om Malik (he puts the Om in GigaOM) is reporting that “a very reliable” tipster told him “that Skype is almost ready to launch [an] iPhone version, perhaps as soon as next week.” Next week being the CTIA Wireless show in Las Vegas, where the big wireless companies get together to pat themselves on the back for stuff like fixing mobile broadband pricing at $60 per month for 5GB of data.

A data-only iPhone plan might look mighty nice, though, if a Skype application were to become available, work well, and data-only plans were affordable and truly unlimited.

If you have an iPhone and you live and die by Skype, using it for keeping track of all your contacts, then it’d likely make a great addition to your downloaded apps. Second-gen iPod Touch users, too, may benefit as well with the use of Apple’s earphone/microphone combo.

But the idea that Skype will be able to save you a ton of money by allowing you to replace your voice plan is likely NOT in the cards.